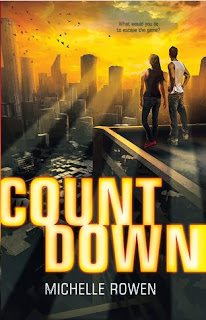 
3 seconds left to live. Once the countdown starts, it cannot be stopped.

Kira Jordan survived her family's murder and months on plague-devastated city streets with hard-won savvy and a low-level psi ability. She figures she can handle anything. Until she wakes up in a barren room, chained next to the notorious Rogan Ellis.

1 reason Kira will never, ever trust Rogan. Even though both their lives depend on it.

Their every move is controlled and televised for a vicious exclusive audience. And as Kira's psi skill unexpectedly grows and Rogan's secrets prove evermore deadly, Kira's only chance of survival is to risk trusting him as much as her instincts. Even if that means running head-on into the one trap she can't escape.


Countdown is a book I was eager to read because I've read other books by Michelle Rowen and I liked them, even though the idea of this book is not original and it reminded me of several movies with this topic but it is definitely an interesting read.

Countdown tells the story of  Kira a 16 year-old girl that wakes up handcuffed in a dark room and while trying to figure out what's going realizes that she isn´t alone, because there is someone else in the room and he´s also handcuffed to wall. Soon afterward she learns that she has been "recruited " to join an underground game called Countdown, which is broadcast and it has several levels and she will receive several tasks that she need to complete along with a partner named Rogan, which is a murderer, in a time designated and if they fail to complete the task, they will be "eliminated" via implants that they have in their heads.

Overall, the plot is fast-paced, with lots of action, with likable characters, some romance and has elements that I really didn´t expect to see in this book, such as artificial intelligence, a little paranormal. It has a scene near the end that really annoyed me because it is the classic scene where the hero and the villain talk and talk and talk and do nothing. But aside from that detail, I enjoyed reading it. This is a new addition to the sub-genre post-apocalyptic/dystopic.


I received an eARC of this book from the publisher via Netgalley in exchange of an honest review.
Posted by Adriana C at 4:00 PM