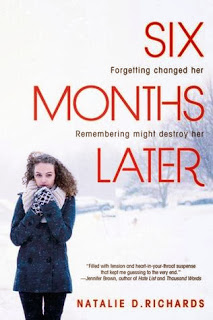 
Chloe didn't think about it much when she nodded off in study hall on that sleepy summer day. But when she wakes up, snow is on the ground and she can't remember the last six months of her life. Before, she'd been a mediocre student. Now, she's on track for valedictorian and being recruited by Ivy League schools. Before, she never had a chance with super jock Blake. Now he's her boyfriend. Before, she and Maggie were inseparable. Now her best friend won't speak to her.

What happened to her?
And why can't she remember?


This is a very good YA mystery book, throughout all the story it kept me guessing the why?, when?, how?, etc. and I could never guess what had happened to her until the very end, in fact once I finished reading it, I had to reread some parts of the firsts chapters and I definitely saw them with new eyes.

Six Months Later tells the story of Chloe a girl who is in her junior year, has she doen´t have the best grades and the truth is that she isn´t very interested in excelling academically and one day she falls asleep in class and when she wakes up she realizes that she´s in the same spot in the classroom but she´s wearing a different outfit, it's night and six months has passed. She´s obviously disoriented and is in the midst of finding out what's going on when she meets with Adam, a classmate with whom she has never spoken a word, he has a bad reputation and apparently she called him to talk about something she does not remember. To add to all the strange things that are happening, she learns that's now she´s Blake´s girlfriend, the boy to whom she had has a big crush for a long time and apparently she´s also a brainy because she got an excellent SAT scores, so now she could be accepted at any college she wants.

But not everything is as wonderful as it seems, because her best friend Maggie doesn´t want to talk with her, does n´t want her around and she doesn´t know why?; Also Chloe realizes that she feels nothing for her super-intelligent-mega-handsome boyfriend, she always dreamed about been Blake´girlfriend, actually she was kind of obsessed with him but now she´s having feelings for Adam, the bad boy with a very bad reputation.

What I really liked about this book is that I had some crazy theories about to where the story was going, but the truth is that I didn´t guess what was going on for most of the book. The plot is really good and in the end the fact that Chloe does not remember what happened to her for the past 6 months of her life is believable. I liked the romance that develops between Chloe and Adam, since it is obvious that there is chemistry between them, whereas with Blake she does not feel the same as for Adam. Six Months Later is a very good book and that´s worth reading .


I received an eARC of this book from the publisher via Netgalley in exchange of an honest review.
Posted by Adriana C at 4:30 PM