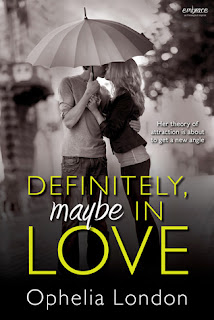 
Spring Honeycutt wants two things: to ace her sustainable living thesis and to save the environment. Both seem hopelessly unobtainable until her college professor suggests that with a new angle, her paper could be published. Spring swears she’ll do whatever it takes to ensure that happens.

“Whatever it takes,” however, means forming a partnership with the very hot, very privileged, very conceited Henry Knightly.

Henry is Spring's only hope at publication, but he's also the über-rich son of a land developer and cash-strapped Spring’s polar opposite. Too bad she can't help being attracted to the way he pushes her buttons, both politically and physically. As they work on her thesis, Spring finds there's more to Henry than his old money and argyle sweaters…but can she drop the loud-and-proud act long enough to let him in? Suddenly, choosing between what she wants and what she needs puts Spring at odds with everything she believes in.

Definitely, Maybe in Love is a modern take on Pride and Prejudice that proves true love is worth risking a little pride.


The first thing that appeal to me about this book was the cover ( I really like black and white images with some color to highlight something ) and then I read that this one was a retelling of Pride and Prejudice, and I was sold! I knew that I had to read this book, because that is my favorite classic. Definitely, Maybe in Love is a very good reinterpretation of Pride and Prejudice and the characters manage to capture what I liked about Elizabeth Bennet and Mr. Darcy.

On one hand we have Spring Honeycutt a girl in her junior year of college, she has three jobs, plus two scholarships to help her pay her tuition at Stanford, there she´s studying Environmental Earth Science and to be taken seriously and stand out among her classmates the previous year she changed her image, now her hair is full of small braids (I picture her as Bo Derek at the movie "10"), she became a vegetarian and participates in all rallies or demonstrations related with the environmentalists. She lives with two roommates (Julia and Anabel) near campus.

Meanwhile Henry is smart, arrogant but not a jerk, he´s a grad student from Duke University and now is attending to Stanford, he comes from a very wealthy family, his family owns land all over the United States, he´s studying to be a lawyer and almost always wears suits or argyle sweaters. I really loved Henry! he´s a great character.

They are polar opposites but end up working together in Spring´s thesis, because her professor told her that she needed a different approach, not only the point of view of the environmentalist but also the financial side, of which she doesn´t know a thing, so Henry ends offering his help with her research, and because of this they end up spending time together and more than once discussed/fight because of their different views of the issue, but despite this both are attracted to each other, although they aren´t so obvious about it.

The story is told from the point of view of Spring, so we only see her thinking and her struggle with herself when she starts having feelings for Henry.

Overall, Definitely, Maybe in Love is a very sweet and swoon worthy romance novel that retells the story of Pride and Prejudice in modern day, and even though it left some characters out ( such as Mr. Collins and Spring´s parents), but I feel that it covered most of the story and this book has a twist that I was not expecting and I´m still not sure whether it was beneficial or not for the plot, but definitely surprised me. This is a New Adult novel, but on the contrary of many books from this genre it doesn´t contains sex scenes, which I liked. I recommend this book for fans of Pride and Prejudice and romantic contemporary novels .


I received an eARC of this book from the publisher in exchange of an honest review.
Posted by Adriana C at 12:01 PM