The Arctic Incident by Eoin Colfer 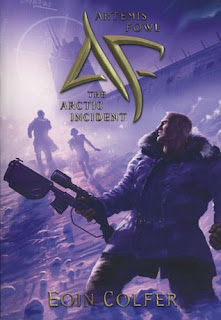 
Artemis Fowl wants to find his father, held hostage in Russia; Holly Short wants to find who's supplying the goblins with human technology; Foaly wants to find out who's disabled all the LEP Technology and pointed the finger at him.

Artemis has received a ransom demand for his father but is captured by the LEP who suspect him of supplying the goblins with dangerous Human technology (batteries). He convinces them he's innocent and agrees to help them if they help him free his father. Meanwhile, down in the underground world, chaos has arisen. An unknown traitor has stolen forbidden weapons and armed a horde of trolls, setting them loose to wreak havoc on the citizens. Clues lead Captain Holly Short straight to Artemis, and she exacts a small bit of revenge by kidnapping him, just as he once kidnapped her. But soon she learns that Artemis isn't behind the chaos, and if she's to have any hope of stopping it, she will need his help. As a result, these onetime adversaries must now join forces -- a mix that proves to be both charming and volatile.


It's been almost a year since the events of the first book and now a 13 year-old Artemis learns that his father may be alive and the Russian mafia sent him a video of a man who could be his father and they' re asking for a ransom. Artemis and Butler decided to go to his rescue.

And while this is happening in the underground Goblins are smuggling prohibited weapons and apparently are getting help from the human world.  When Holly discovers this, she can think of only one human capable to do that, their enemy number one, Artemis Fowl. So Holly is more than happy when she goes above ground to arrest him and from there everything gets more complicated.

I liked The Arctic Incident a lot more than I liked the first book, in this book we see a more human Artemis, not so analytical, cynical and cold as he used to be, there are times when he loses his composure and shows his feelings that made the character of Artemis lot more likeable and I liked his last line of the book.  I love Butler's character, as usual he´s loyal to Artemis and his faith in him is huge, he follows his orders blindly. Commander Root and Captain Holly end up doing a truce with Artemis and work together to discover who is gathering an army of Goblins and why. And in exchange their going to help Artemis to rescue his father.

This book is more dynamic, as we know the main characters, the story flows more quickly.

I really liked this book a lot and of course I'll read the next book.
Posted by Adriana C at 11:14 AM