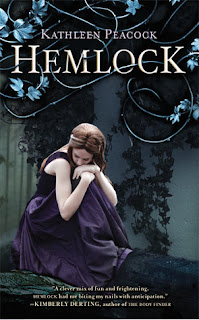 
Mackenzie and Amy were best friends. Until Amy was brutally murdered.

I love this book so much; I needed my dose of werewolves; Hemlock is a really good book about them.

Hemlock takes place in modern day, (I had the vague idea that the story was in the time of Little Red Riding Hood), 12 years ago the government announced that the werewolves were real and this was caused because of a virus; the Lupin syndrome is transmitted via bite or scratch from an infected person and this can turn you into a werewolf.

Hemlock is a small town that had several attacks by a werewolf, one of the victims was Mac´s best friend Amy. Five months after the attacks the Trackers arrived to Hemlock with the purpose to hunt down the werewolf and found among the citizens others infected and send them to the sorf of concentrations camps. The Trackers are sort of a human supremacy group that use force against anyone that is suspected to be infected.

Mac is a 17 year-old girl, she´s strong, loyal, smart and protective of her love ones. Since Amy´s dead, Mac has been haunted by vivid dreams-nightmares (really creepy) of Amy and these dreams along with the arrival of the trackers motivates Mac to investigate Amy´s murder.

The male characters are both best friends of Mac, Kyle and Jason. Kyle is the supportive friend that always is there for her, the responsible, the reliable and the love interest. Jason was Amy´s boyfriend, and son of the wealthiest and most powerful family in Hemlock; since her dead he´s start drinking and is having anger problems, but he´s not a bad guy. These three people are grappling with guilt over the death of Amy, Mac because she canceled the date to go out with her and stayed at home, Kyle because he didn´t answer her call that day and Jason because he didn´t arrive on time for her.

Hemlock is fast-paced, page-turner with twist and turns that I wasn´t expecting, it also has suspense, mystery, romance and werewolves. I really loved this book.
Posted by Adriana C at 1:49 PM