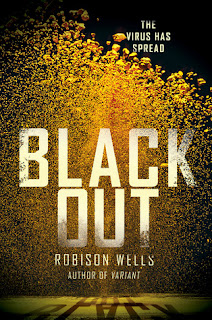 
Laura and Alec are trained terrorists.

There was no reason for them to ever meet.

But now, a mysterious virus is spreading throughout America, infecting teenagers with impossible powers. And these four are about to find their lives intertwined in a complex web of deception, loyalty, and catastrophic danger—where one wrong choice could trigger an explosion that ends it all.


Blackout feels like a science fiction novel with a dash of apocalyptic. The story revolves around four teens with supernatural powers, X-Men style and we see through their eyes what is happening with all adolescents in the United States. Because there had been several terrorist acts across the United States in recent weeks, the country enters a kind of martial law, where due that the suspected terrorists are teenagers, the government decides to capture all adolescents in the country and take them to some sort of concentration camps where they get a DNA test to determine if they are infected with a virus that is causing these changes in adolescents.

The story is told from the point of view of four teens in the third person : Laura, Alec, Jack and Aubrey. Laura and Alec are terrorists who are trying to harm the country, destroying several important land marks , they belong to a group of teen terrorists who have been trained since childhood for this mission. Both are infected with the virus so they have supernatural powers but what I didn´t understood and isn´t explained in this book is the reason for their mission, because they are destroying dams , monuments and historic buildings with the aim of killing the citizenry and cause chaos.

Meanwhile Jack and Aubrey are ordinary teens, they has been friends since childhood, despite their friendship recently had problems, but after being captured and taken to the "camps", their friendship becomes stronger, both are loyal to each other and there is a romance between them.

Overall, I feel like there were missing a lot of world-building in the story and the story is very slow pace and left me with many questions and I did not know the reason behind this teens terrorists attacks to their own country. I really expected more from this book but unfortunately I didn´t enjoy it.


I received an eARC of this book from the publisher via Edelweiss in exchange of an honest review.
Posted by Adriana C at 5:45 PM