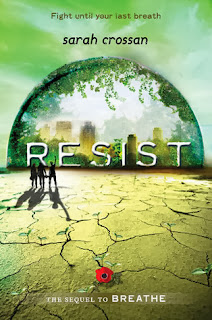 You can read my review of Breathe - here


The sequel - and conclusion - to Sarah Crossan's Breathe. Three teen outlaws must survive on their own in a world without air, exiled outside the glass dome that protects what's left of human civilization. Gripping action, provocative ideas, and shocking revelations in a dystopian novel that fans of Patrick Ness and Veronica Roth will devour.

Bea, Alina, and Quinn are on the run. They started a rebellion and were thrown out of the pod, the only place where there's enough oxygen to breathe. Bea has lost her family. Alina has lost her home. And Quinn has lost his privileged life. Can they survive in the perilous Outlands? Can they finish the revolution they began? Especially when a young operative from the pod's Special Forces is sent after them. Their only chance is to stand together, even when terrible circumstances force them apart. When the future of human society is in danger, these four teens must decide where their allegiances lie. Sarah Crossan has created a dangerous, and shattered society in this wrenching, thought-provoking, and unforgettable post-apocalyptic novel.


I'll start by saying that I did not expect that Resist was the conclusion of Breathe, I had the idea that it was a trilogy and is the standard in the dystopias (and other sub-genres), so it was a pleasant surprise to find out that it was a duology. Another thing I did not expect was the added a point of view, now the story is told from the point of view of Bea, Quinn, Alina and Ronan. When I realized that there was another POV my first reaction was ... who is Ronan! then I remembered seeing him in the first book, but it was a minor appearance that´s why I didn´t remember him.

And because I read Resist and Breathe almost one after the other, it was like just resume where I left it, Bea and Quinn were expelled from the dome and are view as terrorists so they have to find the resistance to join them, and meanwhile Alina and co. must seek a new haven and they head towards Sequoia, a place where they hope to find another resistance group. And when they found Sequoia, it is not at all like any of them expected, I'll just say that it has rules and a way of life that´s rather strict and extreme.

The fact that they are now four points of view in this book worked for me, but there were times that I was in despair because now Bea, Quinn and Alina are separated from each other and my desperation was because at the end of each chapter there was a mini-cliffhanger and I was tempted to skip some chapters just to know what happened to a certain character.

About the main characters in this book, Bea and Quinn grow more as a person, they´re stronger and they are seeing their world with new eyes, they´re tired of what´s happening to the people that lives in the dome, they want to make a difference and although Bea does not see herself as someone strong, in this book I saw her a little more sure of herself and making decisions and I felt like she was the center of change and the plot because a lot of people are depending on her. Alina continues to be strong, independent and wanting to change her world. Meanwhile the new point of view is that of Ronan, he´s the son of the former minister of the dome, but in this book we see that he is also a member of the special forces and that he´s  been fighting against the resistance, but because of what happened in the previous book, he isn´t happy with his job anymore and wants to quit, but there isn´t desertion in the army, but Quinn´s father offers him a way out, he must go to the Outlands and look for Quinn and bring him back, if he does this, Quinn's father will help him leave the army.

Overall, I really enjoyed this book, the story has a good pace, the parts where some character can not breathe still give me goosebumps, Resist has more action than the previous book and I must say that I was a little surprised for the ending, because as a good dystopian book many characters die, but there was one that I didn´t saw coming, but otherwise it was a good ending. I recommended this duology for fans of dystopian novels.


I received an eARC of this book from the publisher via Edelweiss in exchange of an honest review.
Posted by Adriana C at 4:30 PM