Review: Time Between Us by Tamara Ireland Stone 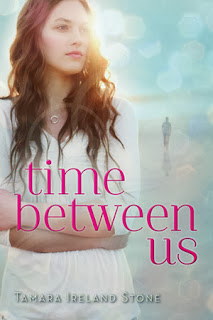 
Anna and Bennett were never supposed to meet: she lives in 1995 Chicago and he lives in 2012 San Francisco. But Bennett has the unique ability to travel through time and space, which brings him into Anna’s life, and with him a new world of adventure and possibility.

As their relationship deepens, the two face the reality that time may knock Bennett back to where he belongs, even as a devastating crisis throws everything they believe into question. Against a ticking clock, Anna and Bennett are forced to ask themselves how far they can push the bounds of fate, what consequences they can bear in order to stay together, and whether their love can stand the test of time.

Fresh, exciting, and deeply romantic, Time Between Us is a stunning, spellbinding debut from an extraordinary new voice in YA fiction.


After seeing several good reviews of this book, I finally decided to buy it and let me tell you I don´t regret it.
, I love it!. I love this kind of book about impossible love and all they have to do to be together. And the plus is that the male protagonist is a time traveler.

Anna is a 16 year old girl, she lives in 1995 Chicago and she runs every morning, since she's a cross country runner and one day she sees a cute guy that´s smiling to her, but when she turned to check again, the guy is no longer there and when she go to check where he was sitting she can´t find his footprints in the snow indicating where he was. That same day a new kid comes to school and she gets surprise to know that is the same guy she saw in the morning but he doesn´t seem to recognize her, his name is Bennett Cooper and she gets intrigued by him. From there their life begins to cross at different times. Meanwhile Bennett is not a normal guy because he´s a time traveler that comes from 2012 San Francisco and he´s in 1995 looking for someone.

The book is told from the point of view of Anna and she 's a runner with plans to travel around the world once she graduates from high school, she´s an average normal girl. But the character that is the more interesting (at least to me) was Bennett, he´s a time traveler, that can only time travel within his life timeline from his birth in 1995 to his present in 2012, and as long the place or time is between that timeline he can travel anywhere he desires and he can travel with another person or objects as long as he´s touching them. He primarily uses his ability to travel sightseeing around the world and to go to concerts that took place in his timeline, but he has a rule, to not disturb any event in time or the destiny of the people. Bennett was my favorite character of the book.

Overall, I really enjoyed it! it is a romantic book with the element of time travel which I loved! the book really grabbed me once I started it, it´s a very entertaining read. Time Between Us is a very cute and sweet story that highly recommended.