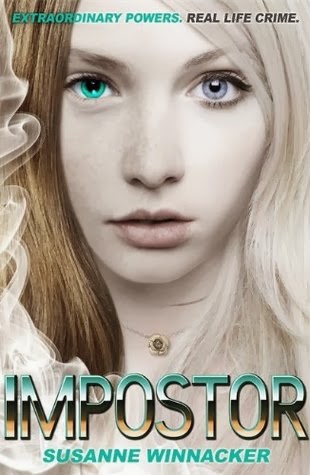 
Tessa is a Variant with extraordinary abilities. She could be a hero, but all she wants to do is fall in love ...

Tessa is a Variant, able to absorb the DNA of anyone she touches and mimic their appearance. Shunned by her family, she's spent the last two years with the Forces with Extraordinary Abilities, a secret branch of the FBI. There she trains with other Variants, such as long-term crush Alec, who each have their own extraordinary ability.

When a serial killer rocks a small town in Oregon, Tessa is given a mission: she must impersonate Madison, a local teen, to find the killer before he strikes again. Tessa hates everything about being an impostor - the stress, the danger, the deceit - but loves playing the role of a normal girl. As Madison, she finds friends, romance, and the kind of loving family she'd do anything to keep.

Amid action, suspense, and a ticking clock, this super-human comes to a very human conclusion: even a girl who can look like anyone struggles the most with being herself.

I´ve always liked books about teens with supernatural powers, X -Men style, and Impostor is a book that in addition to this also includes the suspense element that until last year had not read many of this genre.

Impostor tells the story of Tessa a Variant (that's how they call those with supernatural/special powers). she has the power to change her appearance and can take any form as long as she had touched that person for a certain time to gather information in order to absorb their DNA. And as Tessa is only sixteen years old, she´s a Variant on training in a branch of the FBI that recruits people with special abilities, but when there is a case of a serial killer in a small town, Tessa is assigned her first mission, she will have to impersonate Madison, and research within her group of friends, family and all those close to Madison that are possible suspects and besides being bait, to see if the murderer comes back and finish what he/she started.

What I liked the most of the story besides that the protagonist has the power to change her shape, was the suspense because while Tessa is posing as Madison there are more than one possible suspect within her circle of friends/family who may attempt to harm her, in addition to that Madison/Tessa has stalker who appears almost every night but we never manage to see his/her face.

In regard to romance, there is a possible love triangle, as Alec the guy that had been Tessa´s crush and best friend for the longest time and a Variant like her, is her main love interest and sort of protector. And the other love interest may be Madison´s twin brother Devon, because Tessa start to notice him gradually and feel different around him (or at least that´s what I felt), but being with the appearance of Madison obviously nothing happens. I hope to see more of these guys in the next book.

Overall, it's a YA thriller with a little romance between Tessa and Alec, with likeable secondary characters, with a story that although it is not original it kept me hooked until the end, because I could not wait to find out who was the murderer and its motives. Impostor is a fast-read and I enjoy it a lot. I recommended it to those who like YA mystery books .