Review: The Promise of Amazing by Robin Constantine 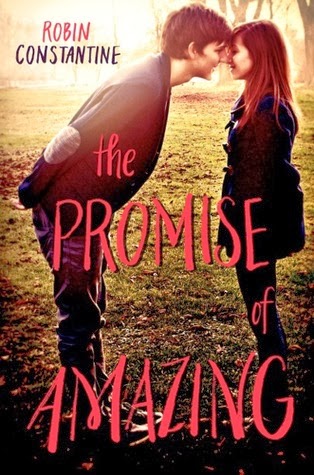 
Wren Caswell is average. Ranked in the middle of her class at Sacred Heart, she’s not popular, but not a social misfit. Wren is the quiet, “good” girl who's always done what she's supposed to—only now in her junior year, this passive strategy is backfiring. She wants to change, but doesn’t know how.

Grayson Barrett was the king of St. Gabe’s. Star of the lacrosse team, top of his class, on a fast track to a brilliant future—until he was expelled for being a “term paper pimp.” Now Gray is in a downward spiral and needs to change, but doesn’t know how.

One fateful night their paths cross when Wren, working at her family’s Arthurian-themed catering hall, performs the Heimlich on Gray as he chokes on a cocktail weenie, saving his life literally and figuratively. What follows is the complicated, awkward, hilarious, and tender tale of two teens shedding their pasts, figuring out who they are—and falling in love.


I had heard a lot of buzz about this book before I started reading it and most of the reviews that I read didn´t put it very well and in most of them the main problem was the insta-love that arises between the main characters, and perhaps because of these reviews, I had zero expectations about it and maybe way I didn´t feel that it was so bad.

I personally don´t like insta-love, I believe in attraction at first sight, but not in the insta-love and depending on how it´s handled in the story I can or can not believe it. In this case I felt a bit forced, that Wren and Grayson meet at a party and from the moment their eyes laid on each other, they can not stop thinking about each other and the fact that Wren saves Grayson life, makes the latter need to know and find out her name, etc, etc. . and then he goes on her search and introduce himself and ask her out, to the point of almost seem like a stalkerish, until Wren accepts to dating him.

But I think my main problem was with Grayson since he is not a great guy, he´s more of a bad boy and because he´s handsome and charismatic, has always used the girls either physically or for their money, that´s until he meets Wren and from there he wants to change, have a second chance but his "friends" will not let him because he is the one that gets the girls for them and this is something that affects the romance between Wren and Grayson.

Overall the book was okay, but as I did have a problem with the insta-love and I didn´t like Grayson. The Promise of Amazing unfortunately was not for me.


I received an eARC of this book from the publisher via Edelweiss in exchange of an honest review.
Posted by Adriana C at 2:30 PM