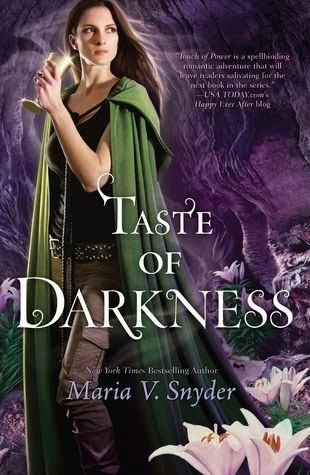 
She's fought death and won. But how can she fight her fears?

Avry knows hardship and trouble. She fought the plague and survived. She took on King Tohon and defeated him. But now her heart-mate, Kerrick, is missing, and Avry fears he's gone forever.

But there's a more immediate threat. The Skeleton King plots to claim the Fifteen Realms for his own. With armies in disarray and the dead not staying down, Avry's healing powers are needed now more than ever.Torn between love and loyalty, Avry must choose her path carefully. For the future of her world depends on her decision.


The Healer trilogy are the first series that I´ve read from Maria V Snyder and I really liked her writing, I grow fonder with both main characters as much as secondary characters; and with a strong, determined, stubborn, defiant main character that prioritize according to her heart and her conscience, not what others say she should do, Avry is definitely one of my favorite female characters. And something that rarely happens to me is to like the villains, but something about King Tohon make me sort of like him, even though he's the bad guy of the story, but I do not completely hate him.

Taste of Darkness continues almost immediately from where the previous book was left, so we get to see what´s happening with Kerrick and how Avry reacts as something to that, and I liked that she does not lose hope, but she doen´t sit and wait to see what would happen, because life continues and she´s in the midst of a war in which she is a vital and necessary part, so she continues her activities and causing problems when necessary, healing people with her healing powers and rescued those that need her help along with her friends.

About the secondary characters such as Quain and Loren known as the monkeys, they made ​​me laugh more than once, because they are always joking and fighting between them, and nevertheless they continue to accompany Avry in all her adventures and Flea who discovers that he has a new power that he isn´t very happy about it, he feels scared about this new power and he distances emotionally from Avry, but nonetheless he accompanies her wherever she goes. Also in this book we get to know what happened to Belen, who was one of my favorite characters in all the trilogy/series.

On the villains in this book ... in this book we see more of King Tohon through 's dreams, he still  keeps terrorizing her, but that´s a walk in the park compared to the Skeleton King, I really could have lived without having known him, he's really creepy. The scene with Avry...I wish I could erase it from my mind, it gives me goosebumps.

Overall, I really loved Taste of Darkness but not as much as its predecessor, but has everything we saw in this great trilogy/series, such as romance, adventure, action, unexpected twists in the plot (which I should have seen it coming, but I didn´t). The ending was really good and satisfying, maybe it was a little rushed for my taste but it left me happy. I definitely recommend that you read this great trilogy/series.