Review: The Secrets of Lily Graves by Sarah Strohmeyer 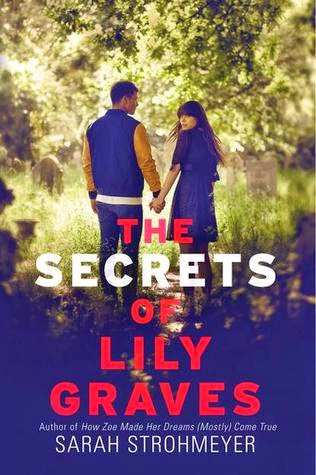 
With the intrigue of Pretty Little Liars and plenty of romance, bestselling author Sarah Strohmeyer weaves a story of secrets and lies—set in a funeral parlor.

Growing up in a house of female morticians, Lily Graves knows all about buried secrets. She knows that perfect senior-class president Erin Donohue isn’t what she seems. She knows why Erin’s ex-boyfriend, hot football player Matt Houser, broke up with her. And she also knows that, even though she says she and Matt are just friends, there is something brewing between them—something Erin definitely did not like.

But secrets, even ones that are long buried, have a way of returning to haunt their keeper.
So when Erin is found dead the day after attacking Lily in a jealous rage, Lily's and Matt’s safe little lives, and the lives of everyone in their town of Potsdam, begin to unravel. And their relationship—which grew from innocent after-school tutoring sessions to late-night clandestine rendezvous—makes them both suspects.

As her world crumbles around her, Lily must figure out the difference between truth and deception, genuine love and a web of lies. And she must do it quickly, before the killer claims another victim.


The Secrets of Lily Graves is a YA contemporary murder mystery that hook me from the first chapter.

Lily Graves is a seventeen year old girl that lives in the funeral home belonging to her family and within a fully matriarchal environment, she lives with her grandmother, aunt and mother. Lily is a peculiar girl because of the environment in which she grew up, and because she has a fascination with death and had been reading books about anything related to death, anatomy and everything she needs to know to work in the family business (she worked on her first corpse when she was fifteen), she has a dark sense of humor and her wardrobe consists of black dresses.

The story begins when Lily has an altercation with Erin because her boyfriend Matt (and Lily´s friend) breaks up with her the previous night, Erin goes and confronts Lily and they end up in a physical fight. And the next day Erin is found dead, and the prime suspects are Matt and Lily.

The plot unfolds slowly like a good mystery, giving us clues slowly, so the story kept my interest throughout the book and I was dying to know who was the murderer, and there was a time that I suspect almost everyone, but I did guess about who killed Erin.

The romance isn´t the main plot, but it´s more like a sub-plot, but I really liked the sort of friendship-romance between Matt and Lily.

Overall, I really enjoyed this book, I love murder mystery books like this one, that hook me from the start, that kept my interest up and had me hanging by a thread until the last moment and about the ending I would have liked it a bit more elaborate, but I can live with it.
Posted by Adriana C at 11:30 AM