Review: The Geography of You and Me by Jennifer E. Smith 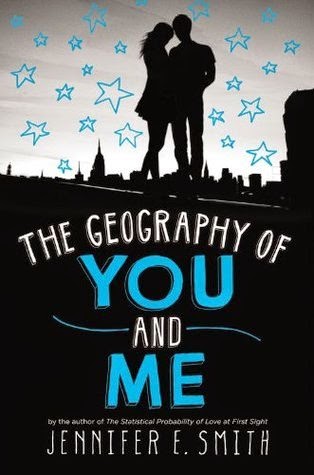 
Lucy and Owen meet somewhere between the tenth and eleventh floors of a New York City apartment building, on an elevator rendered useless by a citywide blackout. After they're rescued, they spend a single night together, wandering the darkened streets and marveling at the rare appearance of stars above Manhattan. But once the power is restored, so is reality. Lucy soon moves to Edinburgh with her parents, while Owen heads out west with his father.

Lucy and Owen's relationship plays out across the globe as they stay in touch through postcards, occasional e-mails, and -- finally -- a reunion in the city where they first met.

A carefully charted map of a long-distance relationship, Jennifer E. Smith's new novel shows that the center of the world isn't necessarily a place. It can be a person, too.

Don´t know why I had the idea that a big chunk of the plot happened in an elevator, but actually the part of the elevator was tiny; actually Lucy and Owen meet when they got trapped in the elevator due to a power outage throughout the city, but soon they are rescued by handy-man from the apartment building where they live, they decide to wander the city which is totally different from what they are used regularly and end up seeing stars, which are never seen in the city and the night is something special for both of them, but by morning both return to their regular routine and they don´t get to see each other for a while and when they finally see each other is to say goodbye as both are moving, Lucy is moving to Edinburgh and Owen makes a road trip with his father to California with no set destination, so that would be it of their story, but without openly acknowledge feelings or that there is something happening between them, they keep in touch through postcards, and the occasional email, but only as friends, so we followed through nearly a year of sporadic email, postcards, times when they lose connection with each other and both continue with their life and times where their paths cross again.

I enjoyed reading The Geography of You and Me, although there were some slow moments, but I liked the dual POV, because we could see what happened to Lucy and Owen, although it's not as romantic as I though, it´s more how they gradually discover that perhaps there is something special happening between them, and the ending was okay.
Posted by Adriana C at 9:00 AM