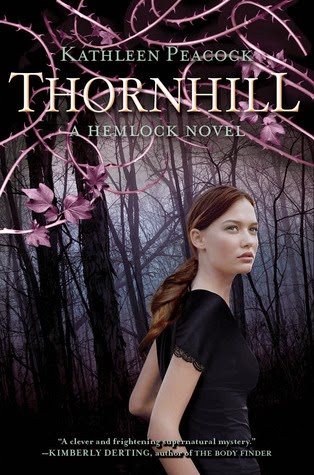 You can read my review of Hemlock - here


Mac can’t lose another friend. Even if he doesn’t want to be found.

The ripple effect caused by Mac’s best friend Amy’s murder has driven Mac’s new love, Kyle, to leave Hemlock and disappear from her life forever. But Mac knows that Kyle plans to enroll in a rehabilitation camp, where he can live with other werewolves. She refuses to accept his decision, especially since the camps are rumored to be tortuous. So she sets out in search of Kyle with a barely sober Jason—and Amy’s all-seeing ghost—in tow.

Clues lead Mac to find Kyle in a werewolf den in Colorado—but their reunion is cut short by a Tracker raid. Now Mac and Kyle are trapped inside the electric fences of Thornhill, a camp for young werewolves. As she devises an escape plan, Mac uncovers dangerous secrets buried within the walls of Thornhill—and realizes that the risk to the people she loves is greater than ever before.


Thornhill is the second book in the supernatural mystery trilogy - Hemlock; in this world is public knowledge the existence of werewolves,

I read Hemlock in 2012, but as I started to postpone series/trilogies because publication dates were delayed, I decided to wait to read a lot of books nearer to the publication of the last book, but it has been some time since I read the first book, I had trouble remembering details and how certain people had been infected, but once I got the thread of the plot, I enjoyed it tremendously. This trilogy is really good!.

In this sequel Mackenzie goes in search of Kyle, his friend and the guy she´s in love with, he´s infected by the werewolf virus, that´s why at the end of Hemlock he decides to leave the city for the sake of their friends and family, because it is dangerous to be associated with a werewolf. And in her quest, she´s accompanied by Jason, their mutual friend and he´s also in love with Mac (so there is a love triangle) and when they finally found him; Mac and Kyle end up entangled in something that precisely Mackenzie was trying to avoid. As Mac and his friends end up discovering firsthand how bad the containment camps really are and they also discover other secrets about these camps.

Something I didn´t remembered were the dreams that Mac had - really creepy dreams - about her best friend Amy, whom was killed in the first book by a werewolf.

Overall, Thornhill is a good sequel with mystery, action and romance, that raises more questions about the Lupin syndrome.
Posted by Adriana C at 8:00 AM