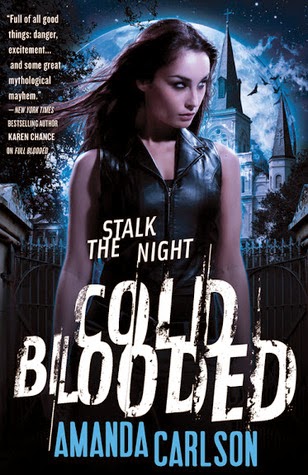 
Magic, mayhem and madness explode in this third installment in the Jessica McClain series.

Jessica McClain is on the run... again.

Finally reunited with Rourke, Jessica arrives home to find that her best friend has been kidnapped, her father has vanished, and the supernatural Sects -- witches, demons, and sorcerers --- don't even have the courtesy to wait until she is unpacked to attack.

Now, mastering her powers as the sole female werewolf might not be enough to save them. Thrown together in a shaky truce with the Vampire Queen, Jessica must show all the different Sects what the true meaning of "the enemy of my enemy" is or her father will die...

Cold Blooded is the third book in the Jessica McClain series and poor Jessica doesn´t rest at all, she barely recovered her mate from the clutches of a goddess who had planned to keep him, when her best friend is kidnapped in order to use her as bait and so they can capture Jessica.

This series it keeps getting better because there is more action, there is finally some romance but not much, because seriously all the supernaturals in the planet or want her dead or want to capture her or intend to gain some advantage by using her in some way, all this due to a prophecy - which still do not know much about it - Jessica will be the perdition or salvation of the supernatural world, plus by each passing day she becomes more powerful and if I remember correctly I think still has not been a month since her first change as a werewolf.

In Cold Blooded we get to know more about the aforementioned sects such as witches, sorcerers and demons, without counting that Jessica has to pay a visit before their agreement to the Vampire Queen, which is not very happy with her.

Jessica is a good hero that has to face many obstacles and problems with other races but so far has emerged victorious, but someone should sincerely give her a break to let her know her new skills and find out more about her prophecy. She´s very strong, very powerful, but everyone knows more about Jessica than herself,

Cold Blooded has lots of action, there is finally some romance and has a cliffhanger ending that left me wanting to read Red Blooded ASAP.
I recommend this series to adult urban fantasy fans.
Posted by Adriana C at 9:00 AM