Review: The Last Time We Say Goodbye by Cynthia Hand 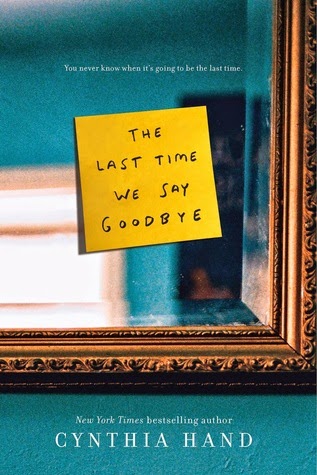 
There's death all around us.
We just don't pay attention.
Until we do.

The last time Lex was happy, it was before. When she had a family that was whole. A boyfriend she loved. Friends who didn't look at her like she might break down at any moment.

Now she's just the girl whose brother killed himself. And it feels like that's all she'll ever be.

As Lex starts to put her life back together, she tries to block out what happened the night Tyler died. But there's a secret she hasn't told anyone-a text Tyler sent, that could have changed everything.

Lex's brother is gone. But Lex is about to discover that a ghost doesn't have to be real to keep you from moving on.

From New York Times bestselling author Cynthia Hand, The Last Time We Say Goodbye is a gorgeous and heart-wrenching story of love, loss, and letting go.


The Last Time We Say Goodbye an emotional and sad contemporary book about teen suicide. Lex's younger brother sends her a text message and soon after he commits suicide, so she feels responsible for his death and for most of the book we do not know what the message said, until near the end we get to know what it said; she blames herself and her father, and she´s constantly angry with those around her, so she push away her friends, broke up with her boyfriend and begins to have problems in her classes (she's in advanced classes and her goal is to go to MIT). Through Lexie´s memories we get to see how close she was with his brother and how both got along very well. This book is about the loss of a loved one, how it affects them and and how to cope.

Besides Lex and her mother, a character that we don´t get to see much but is important for Lex, is her ex boyfriend Steven, he goes to the same advanced classes, so he´s a quietly present in Lex´s life.

The beginning of the book is slow and gradually introducing us to Lex´s life, she´s going to therapy, because she isn´t expressing her feelings about the suicide of her brother, which happened seven weeks before, so her therapist gives her a notebook to write in her memories of her brother, but not necessarily sad things, but also the happy moments as Lex needs to let out her feelings, so she gradually begins to write in her notebook about her brother and through these memories we get to know Tyler, we see the love they had for each other, but we also see his dark moments. I loved the time she writes in the book, I felt it very special.

This was a very sad story about how affects to a family the suicide of a brother/son, about how those involved put their life on hold, while the world keeps moving, and how slowly they can get on with their lives. The end is very emotional, in one moment I was reading it, and I was thinking this is really sad but just that and all of the suddent I was crying like a baby, my emotions were all over the place.
Posted by Adriana C at 10:00 AM