Review: Playlist for the Dead by Michelle Falkoff 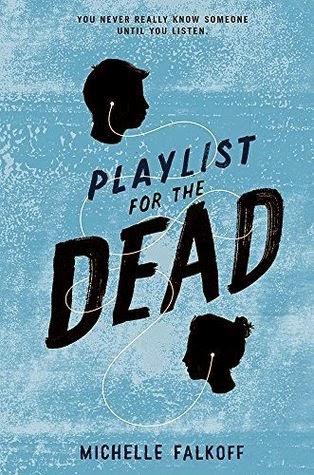 
A teenage boy tries to understand his best friend's suicide by listening to the playlist of songs he left behind in this smart, voice-driven debut novel.

Here's what Sam knows: There was a party. There was a fight. The next morning, his best friend, Hayden, was dead. And all he left Sam was a playlist of songs, and a suicide note: For Sam—listen and you'll understand.

As he listens to song after song, Sam tries to face up to what happened the night Hayden killed himself. But it's only by taking out his earbuds and opening his eyes to the people around him that he will finally be able to piece together his best friend’s story. And maybe have a chance to change his own.

Part mystery, part love story, and part coming-of-age tale in the vein of Stephen Chbosky’s The Perks of Being a Wallflower and Tim Tharp’s The Spectacular Now, Playlist for the Dead is an honest and gut-wrenching first novel about loss, rage, what it feels like to outgrow a friendship that's always defined you—and the struggle to redefine yourself. But above all, it's about finding hope when hope seems like the hardest thing to find.

Playlist of the Dead is a contemporary book about teen suicide.

Sam is a sixteen year old boy, he´s smart but that he doesn´t fit on a single high school label and he has one best friend.

Sam´s best and only friend Hayden, commits suicide and leaves a playlist to Sam with the message "listen and you'll understand" so that he spends his time just listening his iPod all the time, trying to understand why his best friend committed suicide,, if your dead best friend leave you a playlist is for something - right? - And between feeling guilty due a discussion he had with him the day he died and blaming others, he continues with his life until a girl that seem to know Hayden and that inadvertently is giving him clues or ideas about some of the song that he doesn´t place of find any meaning of them, Sam gradually begins to open to new friends and discover new things about his best friend .... while trying to understand his suicide.

Something that I liked - but I did not hear all the songs - is that the name of each chapter is a song from the playlist that Hayden left.

Playlist for the Dead is primarily about bullying, teen suicide, lost and trying to find an explanation to it. This story has a bit of mystery, as Sam begins to have an online "friend" that lets him strange messages. The explanation of this online friend left me a bit unsatisfied, but the book was okay.
Posted by Adriana C at 10:00 AM