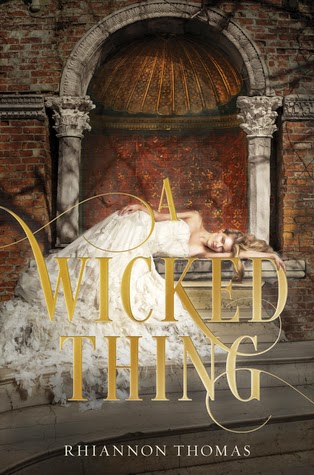 
Rhiannon Thomas's dazzling debut novel is a spellbinding reimagining of Sleeping Beauty and what happens after happily ever after.

One hundred years after falling asleep, Princess Aurora wakes up to the kiss of a handsome prince and a broken kingdom that has been dreaming of her return. All the books say that she should be living happily ever after. But as Aurora understands all too well, the truth is nothing like the fairy tale.

Her family is long dead. Her "true love" is a kind stranger. And her whole life has been planned out by political foes while she slept.

As Aurora struggles to make sense of her new world, she begins to fear that the curse has left its mark on her, a fiery and dangerous thing that might be as wicked as the witch who once ensnared her. With her wedding day drawing near, Aurora must make the ultimate decision on how to save her kingdom: marry the prince or run.

Rhiannon Thomas weaves together vivid scenes of action, romance, and gorgeous gowns to reveal a richly imagined world … and Sleeping Beauty as she’s never been seen before.

A Wicked Thing is the retelling of Sleeping Beauty or at least is based on it, but the plot takes place in the "happily ever after" and the story begins with the kiss that awakens Princess Aurora, who has been asleep for 100 years and upon waking she learns that all those she knew are gone and now she is expected to have her happy ending, with a prince she does not know, nor is attracted to. It is also expected that now that she awakened, better times will come for her impoverished kingdom.

What I liked the story is how Princess Aurora reacts once she´s kissed by her "true love", which is a complete stranger, her reaction was very real and also when she finds out that several princes have kissed her for the past 100 years .... it gives me the creeps.

But beyond that the plot is very predictable, with a very slow pace and there are times when almost nothing happens and it felt very dull romance. Prince Rodric of Alyssinia, is whom awakens Aurora with a kiss, he is nice guy but does everything that his parents tell him to do, so he knows he must marry her, for the good of the kingdom. Prince Finnigan of Vanhelm is interested in Aurora, but only because is convenience for him. And finally we have a boy Tristan working in a tavern/inn that becomes friend of Aurora. Of all of I liked Prince Finnegan because he´s the most honest.

A Wicked Thing is very slow paced and almost everything interesting happens in the later chapters, but overall it´s an okay book, but I felt that something was missing.
Posted by Adriana C at 11:30 AM