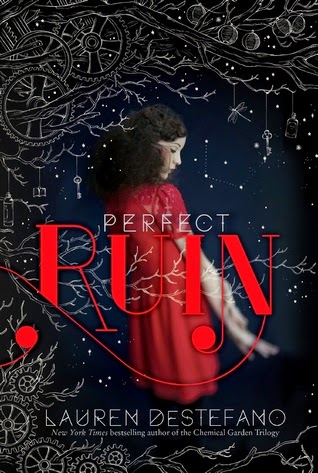 
On the floating city of Internment, you can be anything you dream, unless you approach the edge. Morgan Stockhour knows getting too close can lead to madness, like her older brother Lex, a Jumper. She takes solace in her best friend Pen, and in Basil, the boy she’s engaged to marry. When she investigates the first murder in a generation, she meets Judas. The suspect was betrothed to the victim, but Morgan believes he is innocent. Nothing can prepare Morgan for the secrets she will find – or whom she will lose.


Perfect Ruin is another dystopian book (I still don´t get tired of them) and takes place on Internment, a city floating in the sky, where citizens live the "perfect" life, because there anyone can study or work in what they want, the births and departures (deaths) are controlled by the government, people are engaged from birth and everyone is free to do whatever they want as long as they stay away from the edge of town which for some reason incapacitates those who approach it and the persons that approach the edge are called Jumpers.

Morgan is a young woman who dreams of the world below, but because his brother Lex is a jumper and due his experience, she tries to keep to a minimum her curiosity about the unknown and tries to settle for life in city of Internment and accept her life, which to some extent she´s happy with her family, her best friend Pen and her fiance Basil, that is until a classmate is found dead, which is the first violent act that her generation has faced.

This murder creates panic among residents of the quiet city of Internment and when is suspected that the murder is Judas, the victim´s betrothed, something that Morgan is not so sure, she doesn´t believe him to be guilty, so she slowly begins to discover that her idyllic world, it is not really perfect.

Internment is a mixture of old and new, as there are some technology, because they have a train around the city and it can be seen other type technology in the city, but at least for me, it feels like it takes place in the first half of the last century, it gave me that idea for their by customs and manners.

Overall, Perfect Ruin is a good first book in a trilogy, because it takes its time to describe the world where it develops, how society works, why it is believed that the floating city is in the sky and how the government works. The plot has its elements of mystery, intrigue, romance with a dose of friendship and some interesting twists, plus it has lovable characters. I recommend this book for dystopian fans.
Posted by Adriana C at 9:00 AM