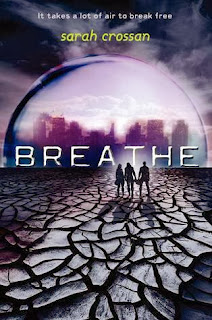 Quinn
should be worried about Alina and a bit afraid for himself, too, but even though this is dangerous, it's also the most interesting thing to happen to him in ages. It isn't every day that the girl of your dreams asks you to rescue her.

Bea
wants to tell him that none of this is fair; they'd planned a trip together, the two of them, and she'd hoped he'd discover her out here, not another girl.

And as they walk into the Outlands with two days' worth of oxygen in their tanks, everything they believe will be shattered. Will they be able to make it back? Will they want to?


Dystopian/post -apocalyptic is one of my favorites sub-genres and I have read some of them about water scarcity, floods, post-war that contaminate the world, falling in love is prohibited, societies with high rates of teen suicide, etc. . , but I had not read one about what would happen if humans destroyed all the trees on earth and across several generations there was a "switch"  in the world where oxygen levels fall dramatically and it made the air unbreathable. Well this is the world were Alina, Quinn and Bea live.

It had been three generations since the "switch" and some lucky humans live in a dome/pod, where the company BREATHE is the supplier of breathable air. People living within the dome live under a regime of three social classes where Premiums are those with good jobs within the company BREATHE and have enough money to pay extra oxygen tanks which are necessary for practicing any physical activity. Then there are the second class where the stewards and other employees and the last class are the auxiliary (or working class), who spend all day working and do not have enough money to pay for extra oxygen.

Breathe is told from the points of view of Alina, Quinn and Bea. Alina is an auxiliary, she´s strong, smart and purposeful but she´s also a member of the resistance, whose goal is to steal trees from the biospheres within the dome and replant them in the outlands. Which is not in the best interest of the pod minister. Bea is also a auxiliary, she ´s good hearted girl that always try to do right thing and is in love with her best friend Quinn. Quinn is a Premium, he has always had an easy life, but even though he´s rich he isn´t a despot like the rest of the Premiums, he´s a boy who is guided by a pretty face and in that moment he has his eyes set on Alina. So when he and Bea are planning a camping trip outside the dome, they have the oxygen needed for their two days trip, but what they did not expect is to meet with Alina, and Quinn can not resist a pretty face and so he decides to help Alina. So these three teens end up making a trip together and that at least Quinn and Bea did not expect and they end up discovering a world outside the dome different from the one they had been told all their life.

I really really liked this book, the idea is very interesting and original (at least I have not read another book on this subject), it has well-developed main characters and it´s easy to grow fond of them. And there are times on the book that give me goosebumps, especially when some characters can not breathe, that moments were really intense (at least for me) and the outlands are really creepy, with all the drifters (with solar respirators), the before world in ruins...just creepy. Breathe is a book that fans of dystopian novels will enjoy.


"Breathing is a right, not a privilege, so I'm stealing it back."