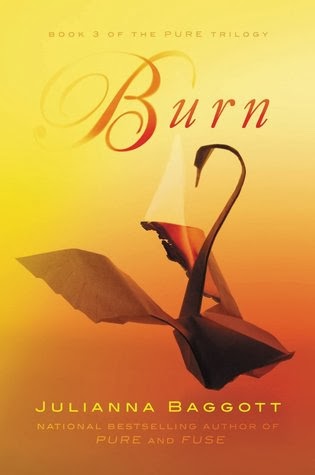 You can read my review of Pure - here & Fuse - here


Inside the Dome, Patridge has taken his father's place as leader of the Pures. His struggle has led him here, intent upon bringing down the Dome from the inside, with the help of a secret resistance force. But things are not as simple from his new position of power and he finds himself tempted by his father's words: perhaps if the world is to survive it needs the Dome - and Partridge - to rule it...

As Partridge's resolve weakens, Pressia and Bradwell continue piecing together the clues left to them from the time before the Detonations. It is their hope that they will be able to heal the Wretches, and free them from their monstrous fusings and the Dome's oppression once and for all. But everything depends, too, on Partridge. Separated by distance and history, can they still trust their friend and ally? Or is the world doomed to an eternity of war and hardship?


Burn is a book that I  was impatiently waiting to read, so my expectations were sky-high, so although the book didn´t met all my expectations at the end, I really enjoy it, even though I have problems with the ending.

This book begins about a month from where the previous book was left, so Patridge is the ruling power inside the dome or at least that´s what it seems, but despite having been in power for a month he hasn´t achieved nothing of what he expected to help the wretches. Meanwhile Pressia, Bradwell, Captain and Helmud are still in Ireland trying to recover from what happened to them, take back the formula and go home to do their part and with Partridge help to heal and remove the fusing from the wretches.

I'm always a bit apprehensive when I´m reading the final book in a trilogy or series, because I always have an idea of ​​what I want or expect to happen with the story, but it rarely happens what I want and I'm a little afraid that I may not like the end, due to remaining unanswered questions, etc, etc.; but I had great expectations but I also didn´t want it to end that´s why I tried to prolong it the more I could because I wanted to enjoy it. In Burn there is less action than on the previous books because the plot is more focused on trying to balance or show both sides of the coin, since the Pures want and think they are the chosen ones, that they are right and are the wretches should be permanently eliminated. Meanwhile the wretches, think and want to make them pay (the Pures) for what they did to them and the world.

Overall, I really enjoyed it, but I felt that the pace of the book was a little slow in the first part of the book and adding to that the jumping between four different point of views there were times when I desperate because I wanted to know what was going to happen to the dome, the Pures and the wretches. Regarding the main characters there were times when I was frustrated with Lyda, Partridge and Bradwell mainly because of the decisions they were making (no! why?!), but I loved Pressia, el Captain and Helmud. And the ending ..... I'm still processing it, is not the end I would have liked or expected, but that end is maybe what must happen for the characters have a different future, it was realistic, but I felt it a little rushed and left me with some unanswered questions.
I really enjoyed this trilogy and I definitely recommend the Pure trilogy, to those that like a little dark and raw post-apocalyptic/dystopic novels.

But she´s chosen this truth - grotesquely beautiful and beautifully grotesque - this world.