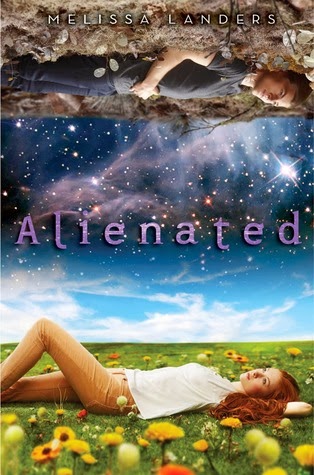 
Interplanetary relations have never been more exciting! The first in a funny, romantic YA sci-fi series.

Two years ago, the aliens made contact. Now Cara Sweeney is going to be sharing a bathroom with one of them.

Handpicked to host the first-ever L’eihr exchange student, Cara thinks her future is set. Not only does she get a free ride to her dream college, she’ll have inside information about the mysterious L’eihrs that every journalist would kill for. Cara’s blog following is about to skyrocket.

Still, Cara isn’t sure what to think when she meets Aelyx. Humans and L’eihrs have nearly identical DNA, but cold, infuriatingly brilliant Aelyx couldn’t seem more alien. She’s certain about one thing, though: no human boy is this good-looking.
But when Cara's classmates get swept up by anti-L'eihr paranoia, Midtown High School suddenly isn't safe anymore. Threatening notes appear in Cara's locker, and a police officer has to escort her and Aelyx to class.

Cara finds support in the last person she expected. She realizes that Aelyx isn’t just her only friend; she's fallen hard for him. But Aelyx has been hiding the truth about the purpose of his exchange, and its potentially deadly consequences. Soon Cara will be in for the fight of her life—not just for herself and the boy she loves, but for the future of her planet.


I 've always liked stories about aliens and especially the love stories between humans and aliens, I don´t know if someone remember Roswell (TV series)? it was one of my favorite series about aliens, so when I saw this book, I'll be honest the first thing that caught my eye was the beautiful cover (yes, I love books with beautiful covers), but after reading the synopsis really interested me.

Alienated tells the story of Cara, a girl in her senior year of high school and valedictorian. She´s chosen from thousands of students (valediactorians) in the U.S. to host one of the first exchange students from Planet L ' eihr because Aelyx will go to the USA, Syrine to France and Eron to China, in order to be a school year on earth and thus interact with humans and appear in a weekly talk show on TV (at least Aelyx), so that humans gradually got used to the idea of interacting with aliens, because the governments plans to make an alliance with the L'eihrs, and at the end of the school year, it is planned to be the human hosts the ones that would travel to planet L'eihr.

So once on earth Aelyx and Cara must lead an almost normal school life, or at least that is until the people living in the city begins to get paranoia and do not want Aelyx on earth and start making protest in front of their high school and Cara´s house and she starts receiving threatening and insulting messages and things start to spiral out of control.

The book is told from the point of view of Cara and Aelyx, and something I like the story is that there isn´t instant love because the first impression she has of Aelyx is that he´s extremely handsome, but that's it, she doesn´t declared her undying love or anything like that. Aelix is very distant and apparently on plant L'eihr they aren´t used to physical contact (he doesn´t like to be touched), or any type of demonstration affection. Initially Aelyx is a know-all, that says what he thinks without sugar coating or censored himself, but the more time he spends on earth and Cara, he tries to adapt and be a little more friendly.

Overall, I really liked Alienated, it´s a funny, very entertaining book with a fresh idea and some mysteries that had their answers in this book, with a good ending (without cliffhanger...yay!) and cannot wait for the next book - Invaded. I highly recommended this book for fans of YA sci-fi books with a budding romance.