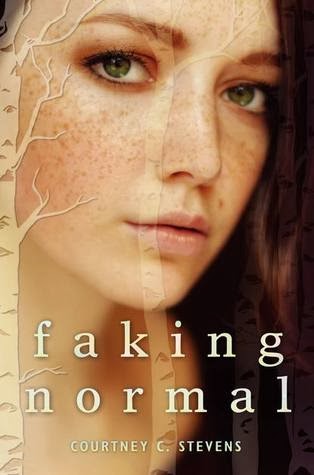 
An edgy, realistic, and utterly captivating novel from an exciting new voice in teen fiction.

Alexi Littrell hasn't told anyone what happened to her over the summer. Ashamed and embarrassed, she hides in her closet and compulsively scratches the back of her neck, trying to make the outside hurt more than the inside does.

When Bodee Lennox, the quiet and awkward boy next door, comes to live with the Littrells, Alexi discovers an unlikely friend in "the Kool-Aid Kid," who has secrets of his own. As they lean on each other for support, Alexi gives him the strength to deal with his past, and Bodee helps her find the courage to finally face the truth.


I have said more than once that I like realistic books that break my heart into little pieces but with a more or less happy ending and this is not the first book I read about sexual assault, but one of the few who once I start reading it, I couldn't put it down and once I finished reading it, couldn't get it out of my mind.

Faking Normal tells the story of Alexi, a girl that her life has not been the same since summer, because that was when she was sexually assaulted, but she pretends to be fine and acts normal in front of her family, friends and classmates, but every day she sits inside her closet and compulsively scratches her neck until it bleeds and then she counts compulsively the vents in her bedroom, all this allows her to calm down somehow. Because after all she is not sure if she really was abused, because she never said no, she just froze in panic, so she blamed herself for letting it happen and all the blame lies with her ​​and not her attacker.

Then Bodee comes into her life, he´s a guy from school whom she´d never has crossed a word, he´s the weird kid and everyone knows him as the "Kool-aid kid", because he dyes his hair with Kool-aid; Bodee comes to live at her house, he is going through a very difficult time in his life and Alexi¨s family invite him to live with them temporarily. I must say that Bodee is my favorite character of the book, despite also having his own problems and been broken, he's kind, very protective and knows that something is going on with Alexi and tries to be there for her.

Also as part of the plot and something that makes Alexi´s days bearable and that is the mystery of Captain Lyric, a guy who writes songs phrases or quotes everyday on her desk and Alexi completes the verse of the song and she challenge him by leaving another verse of a song so that he completes it, they only communicate through songs and she does not know who he is.

Overall, Faking Normal is a very beautifully written contemporary novel with a powerful, heart wrenching, poignant and realistic plot, with unforgettable characters and that broke my heart to teeny tiny bits. Definitely a MUST read book.

I say a little prayer of thankfulness. Mom and Dad believe they invited Bodee into our home to help him, but the truth is, he´s helping me.

"..this´ll sound weird, but when I was a kid I believed in monsters. You know, like vampires. Werewolves. Ghosts. And I believed in them because I knew at least one monster existed. He wore a shirt with his name stiched across the pocket. And carried a fifth for a weapon. And sometimes a knife."