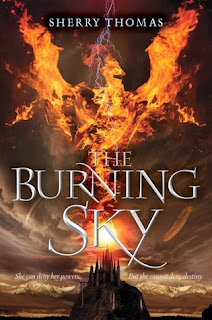 Iolanthe Seabourne is the greatest elemental mage of her generation—or so she's being told. The one prophesied for years to be the savior of The Realm. It is her duty and destiny to face and defeat the Bane, the greatest mage tyrant the world has ever known. A suicide task for anyone let alone a sixteen-year-old girl with no training, facing a prophecy that foretells a fiery clash to the death.

Prince Titus of Elberon has sworn to protect Iolanthe at all costs but he's also a powerful mage committed to obliterating the Bane to avenge the death of his family—even if he must sacrifice both Iolanthe and himself to achieve his goal.

But Titus makes the terrifying mistake of falling in love with the girl who should have been only a means to an end. Now, with the servants of the Bane closing in, he must choose between his mission and her life.


I haven´t read a lot of fantasy novels, but lately I've been reading several books of this genre and are really enjoying it, I think I 'm gonna let rest a little the dystopias to read more fantasy novels.

I loved The Burning Sky! it has good start and with great world building and perhaps for some this can be a little slow at the beginning but I feel that it was necessary to understand the different types of mages and magic. Iolanthe and Prince Titus live in a world where everybody do magic, in their present the mages depend more potions, spells and wands, but there are few elemental mages; these mages can control one or more of the elements: water, earth, fire and air. And Iolanthe is an elemental mage she can control fire, water and earth, and although she is good controlling the elements than others she isn´t considered a great mage until one of her elixirs gets spoil, and she finds the way to fix it, through a lightning ... something she never tried before but she decides to try ... and when she does succeed, her life is changed forever as several people are trying to get hold of her, with the intention of giving her to The Bane. So she must run and hide.

For his part, Prince Titus knows he must find and protect Archer Fairfax, because the future of his kingdom depends of his help, what Prince Titus did not expect was that Archer being a girl instead of a boy.

The book is told from the point of view Titus and Iolanthe. Iolanthe is a 16 year old orphan girl and she has a guardian that care for her - Master Haywood, she is an elemental mage originally uses her powers to entertain their neighbors. What I really liked about her character was that when she learns her destiny, that she will have to face The Bane in the future, the most powerful mage of their time, she reacts ... incredulous, and refuses to participate ( and rightly so ), wants to escape her fate, because in the future she doesn´t see herself facing anyone, much less to The Bane, and her reactions I felt them very real. On the other hand we have the Prince Titus, a 16 years old boy, he´s the heir to the throne of The Domain, but his kingdom live under the oppression of Atlantis and its leader 's  The Bane, so all his life Titus had to pretend to be selfish, egotistical, have to lie to everyone around him and he does not trust anyone. And  because is a mandate from The Bane, instead of studying in a school for mages, for the past few years Titus has had to study at Eton College in England, in the human world. Most of the story takes place in 1883 at Eton College.

Overall, The Burning Sky is an excellent start to a trilogy, the story has a good pacing, has action, magic and romance. The romance is not insta-love, since feelings slowly emerge and against the wishes of both, because both think that if there were feelings involved, it could affect their partnership and Prince Titus ultimate goal is to fight against The Bane. I really LOVE this book and will impatiently wait for the next book. I highly recommend this book.