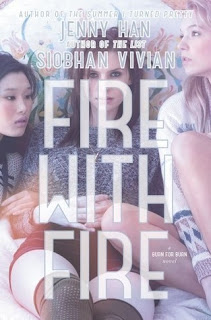 You can read my review of  Burn for Burn - here

Lillia, Kat, and Mary had the perfect plan. Work together in secret to take down the people who wronged them. But things didn’t exactly go the way they’d hoped at the Homecoming Dance.

For now, it looks like they got away with it. All they have to do is move on and pick up the pieces, forget there ever was a pact. But it’s not easy, not when Reeve is still a total jerk and Rennie’s meaner than she ever was before.

And then there’s sweet little Mary…she knows there’s something seriously wrong with her. If she can’t control her anger, she’s sure that someone will get hurt even worse than Reeve was. Mary understands now that it’s not just that Reeve bullied her—it’s that he made her love him.

Eye for an eye, tooth for a tooth, burn for a burn. A broken heart for a broken heart. The girls are up to the task. They’ll make Reeve fall in love with Lillia and then they will crush him. It’s the only way he’ll learn.

It seems once a fire is lit, the only thing you can do is let it burn...


I really loved Fire with Fire, is way better than the previous book and maybe because I already know the characters and where the plot is going more or less.

This book begins a few days after the ending of the previous book, and Lillia, Kate and Mary have to deal with the aftermath of their acts of revenge.They´re to some extent reassured that they haven´t been discovered for what they did to Reeve on the homecoming dance and they will not end up in jail. So they pretend to continue with their lives normally, only that Rennie is angry with Lillia and aims to make her life impossible. And Reeve doesn´t seems to have learned his lesson because he still haven´t apologizes to Mary, and he mistreat her so the girls are back together, to hurt Reeve the way he hurt Mary. So now the plan is to make him fall in love with Lillia and once she has achieved that, the plan is to break his heart in the same way that Mary's heart is broken.

But again not everything is according to their plan and the romance doesn´t turned out as they expected and this time they´re are the ones that end up burned and their sweet revenge ends up being bitter,

Overall, I loved this book! as I comment before Fire with Fire is much better than Burn for Burn, it´s a fun, fast paced read, with mystery and romance. With alternating viewpoints between the main characters, we can go slowly discovering the plot. The characters are great and although I had my doubts about the powers that Mary was beginning to develop, I honestly didn´t expect her revelation! I had to reread several of her chapters and I saw them with new eyes. And it has an ending that left me with my mouth hanging open and I´m eagerly looking forward to Ashes to Ashes. Fire with Fire is a contemporary novel tinged with paranormal and I highly recommend it!.


I received an eARC of this book from the publisher via Edelweiss in exchange of an honest review.
Posted by Adriana C at 3:30 PM