Review: Not a Drop to Drink by Mindy McGinnis 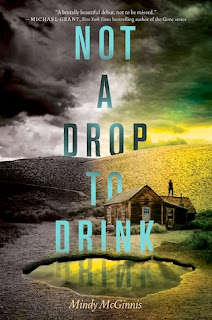 
Regret was for people with nothing to defend, people who had no water.

Lynn knows every threat to her pond: drought, a snowless winter, coyotes, and, most importantly, people looking for a drink. She makes sure anyone who comes near the pond leaves thirsty, or doesn't leave at all.

Confident in her own abilities, Lynn has no use for the world beyond the nearby fields and forest. Having a life means dedicating it to survival, and the constant work of gathering wood and water. Having a pond requires the fortitude to protect it, something Mother taught her well during their quiet hours on the rooftop, rifles in hand.

But wisps of smoke on the horizon mean one thing: strangers. The mysterious footprints by the pond, nighttime threats, and gunshots make it all too clear Lynn has exactly what they want, and they won’t stop until they get it….

With evocative, spare language and incredible drama, danger, and romance, debut author Mindy McGinnis depicts one girl’s journey in a barren world not so different than our own.


Not a Drop to Drink is a post-apocalyptic novel that takes place after that there was a shortage of water and the remainder of drinkable water is guarded at all costs. Lynn has lived all her life with her mother only, she has never interacted with other people and spends her days with her mother on the roof of their house with a rifle in hand guarding the pond at their property and shooting at any human that approaches them.

Because Lynn knows no other life, only what her mother has told her, she´s suspicious of everyone, has hard feelings at the beginning of the story and all the people outside of their little family are considered enemies, so they shoot first and investigate later.

It's easy to become emotionally attached to the character of Lynn, because during the course of story, she will open up to new people, she´ll grow up and begin to make her own decisions and even go against everything her mother taught her. And Lynn's mother is a really tough woman, she´s practical, blunt and willing to do anything to stay alive, but there is a part that left me speechless...this is the quote:


“Just know that there's bad men in the world, and dying fast by your mother is a better way than theirs.”

And this is what her mother tells her since she was 9 years old.


“Do you want to die like this?" Mother had asked, that night and every night since then.
Lynn's answer never changed. "No."
And Mother's response, their evening prayer. "Then you will have to kill.”

Not a Drop to Drink is a story of survival, of constant struggle that touches several issues of what happens when the human is desperate to survive, to what the human is that is capable to do to stay alive and how important is family. The only details that I found in this book is that it has several parts that are slow, I was just waiting for something to happen and the ending is very bittersweet (I´m still in denial).