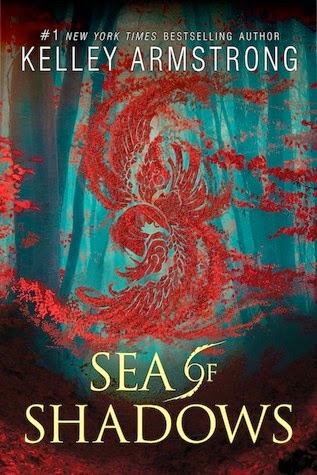 
They hear the spirits.
They must obey.

In the Forest of the Dead, where the empire's worst criminals are exiled, twin sisters Moria and Ashyn are charged with a dangerous task. For they are the Keeper and the Seeker, and each year they must quiet the enraged souls of the damned.

Only this year, the souls will not be quieted.

Ambushed and separated by an ancient evil, the sisters' journey to find each other sends them far from the only home they've ever known. Accompanied by a stubborn imperial guard and a dashing condemned thief, the girls cross a once-empty wasteland, now filled with reawakened monsters of legend, as they travel to warn the emperor. But a terrible secret awaits them at court—one that will alter the balance of their world forever.

From #1 New York Times bestselling author Kelley Armstrong comes a captivating new series that blends elements of fantasy and horror with the pulse-pounding action and romance that have earned her a devoted readership worldwide.


I´ve read Darkest Powers and Darkness Rising trilogies and the Women of the Otherworld series written by Kelley Armstrong, including some novellas and short stories in the same universe, therefore Sea of ​​Shadows is my first Kelley´s book that develops outside of that universe and on a different sub-genre, because this book is a fantasy novel while the others are urban fantasy and paranormal romance.

The book is told from Ashyn´s and Moria´s POVs, our main characters are twin sisters and their whole life they had been trained in their gift as Seeker and Keeper respectively and they´ve been taught combat with daggers and other items needed to complete their training.

Moria is the Keeper and responsible for protecting the people against evil spirits, she's strong, tough, really good with the dagger, able to defend herself and she has a wildcat of the Immortals named Daigo as her companion. Ashyn is the Seeker, responsible for going into the forest of the dead and find the bodies of the exiles and give them rest, she´s sweet, compassionate, she ins´t very good at fighting with her dagger and her companion is a giant hound of the Immortals called Tova.

And on Ashyn´s first trip to the forest of the dead something goes wrong and the spirits are not so happy and they attack her and the group that accompanies her. And because of these events Ashyn and Moira are separated and both embark on a journey to seek help at the nearest town and hoping to find one another. Ashyn is accompanied by Ronan a young thief, he´s very friendly, witty and resourceful. Meanwhile Moira is accompanied by Gavril, a guard from her village, he doesn´t talk much, is surly and incredulous when strange things start to happen around them.

Overall, I really liked the story, though the first part of the book was a little slow and I didn´t enjoy much the change between POVs, since they´re several chapters of Ashyn´s POV in a row, and then there´s a mini cliffhanger and then it change to Moira´s POV´s chapters with several in a row; so I'm not used to this type of dual POV, because the books that I´ve read so far had alternated POVs. Sea of ​​Shadows has action scenes and gives the idea that there will be romance in the next book (there wasn´t romance in this book), the plot it felt very introductory and I think that the world building was lacking and something that caught my attention was the mention of Japanese or Oriental elements in the story, but I'm not sure if that´s kind of world that the story is set. But after the ending I´m looking forward to read the next book - Empire of Night.
Posted by Adriana C at 12:30 PM