Review: This Side of Salvation by Jeri Smith-Ready 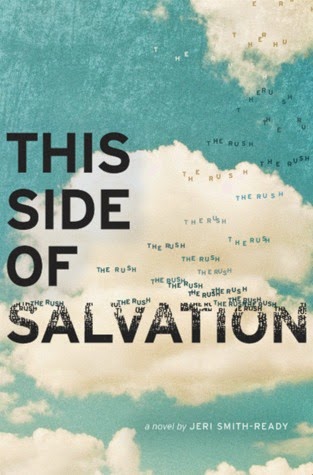 
Everyone mourns differently. When his older brother was killed, David got angry. As in, fist-meets-someone-else’s-face furious. But his parents? They got religious. David’s still figuring out his relationship with a higher power, but there’s one thing he does know for sure: The closer he gets to new-girl Bailey, the better, brighter, happier, more he feels.

Then his parents start cutting all their worldly ties to prepare for the Rush, the divine moment when the faithful will be whisked off to Heaven…and they want David to do the same. David’s torn. There’s a big difference between living in the moment and giving up his best friend, varsity baseball, and Bailey—especially Bailey—in hope of salvation.

But when he comes home late from prom, and late for the Rush, to find that his parents have vanished, David is in more trouble than he ever could have imagined...

Lately I have read several contemporary books about the loss of a loved one and each one of them is different because of how every person acts or feels different during mourning, but even though I founds this book a little different of the others and unique, perhaps because of the way it is told.

The book begins on the day that is supposed to be the end of the world (The Rush) in the prom after party that David is attending, in which he´s with his sister Mara, then both return home to discover that their parents missing. That´s why David and his sister must discover what really happened to their parents and if there is any way to find them.

The book is told from David´s POV and the chapters alternate between the present and the past, beginning when he was 7 years old until the day of the prom party, the day of the rapture (The Rush) and the day their parents disappeared.

In the past we see that his brother John died in Afghanistan when David was 12 years old and devastated his family; so for a while David was constantly fighting in school and then start to express what he felt at that time by graffiti, but when he turns 13 years old, his family visit another church and find a new meaning to their pain in religion, not only David´s parents convert to a different religion but also he and his sister but not only because his parents want them to do that but because David truly becomes a believer. So from there his entire family changes, David and his sister begin to be educated at home, to help the community, they start going to youth groups at his church and at home there is a new set of rules, which David and his sister followed to the letter.

David is a 16 year old who obeys his parents, is a very good baseball player and he loves this sport, he 's a good student and a devoted religious. But when his parents discover a website that talks about the Rapture or Doomsday (The Rush), which approaches this belief, they accept it with open arms and begin to make preparations for the day, they see it as something that make sense and then their parents start to behave differently, especially his father begins to speak only with quotes from the Bible (and nothing else) and David instead of feeling more connected to his parents, starts to feel that his parents have distanced themselves from everyone.

I really enjoyed this book and I must say that although This Side of Salvation is about religion, and has various references to the Bible, is not a religious book; is a book about a young man and his family, about how they struggle with the death of his older brother, which greatly affected his father and David (there is a part in the book where we get to see why), and David wants to keep his family together and try not to cause problems, how David finds his first love and friendship.


I received an eARC of this book from the publisher in exchange of an honest review.
Posted by Adriana C at 12:30 PM