Review: The Summer I Wasn't Me by Jessica Verdi 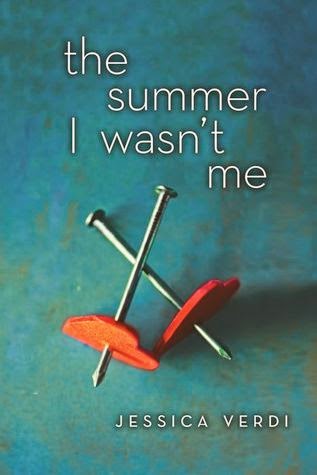 Lexi has a secret.

She never meant for her mom to find out. And now she's afraid that what's left of her family is going to fall apart for good.

Lexi knows she can fix everything. She can change. She can learn to like boys. New Horizons summer camp has promised to transform her life, and there's nothing she wants more than to start over.

But sometimes love has its own path...

Lexi is a seventeen year old girl that when her mother learns that she´s gay, decides to send her to a religious summer camp, so that she can be "cured" of her disease and Lexi agrees to go, because since the death of her father six months ago her mother has been retracted almost zombie-like and Lexi is afraid of losing her so she decides to put all her effort and hopes that this program really works and she can be "de-gaying" and not loose her mother .

And when she arrives to New Horizons summer camp she gets the surprise of her life, first in the room (that she will share with other girls), that´s fully decorated in pink and the uniforms are pink (for girls, because there are boy campers and they wear blue) and they´ll be supervised all the time and they must dress, wear make up and do her hair in a girly way. In the first day all campers are separated into groups of four, two girls and two boys, because each group will do all the activities together during the summer and do everything as a group, and Lexi´s second surprise arrives in the way of the other girl in her group - Carolyn, a girl that from the first time that she see her, she likes her, so it will be hard to try to stop being gay, when the girl that Lexi is attracts to will be with her all the time during the next two months.

The story is entirely told from the point of view of Lexi, she´s gay, but she hasn´t told anyone because she was afraid to openly admit it, only two people know her secret, Zoe the girl she was in love with and her mother because she discovered it when she found a notebook full of drawings of Zoe. So she isn´t openly gay. In Lexi´s group is Carolyn are a girl of sixteen years old, she´s there by choice and hopes that will overcome this "phase" of her life, and to complement the group are Daniel a fifteen years old boy, he´s very shy and is there by choice and Matthew who is openly gay, has a boyfriend and is there because his parents sent him, but he doesn´t want to be there. Of these characters my favorite was Matthew and in him Lexi finds a great friend.

What I liked was the friendship between Matthew and Lexi, and they do very good team and help each other (or at they least try). And the fact that Lexi is trying to be honest with herself, although she sometimes try to put everything in her power to become straight for the sake of her mother, but she was aware that it may not work for her.

What I didn´t like was: Mr. Martin, the director of the camp and he imparts most of the talks, dynamics and prayers to "cure" the campers . And there were many parts of the story that made me really angry but especially an event that happens in the last part of the book that really shock me and I could not conceive how people who are supposedly very religious allow that to happen.

Overall, there were parts that I liked as Lexi and Matthew; others that made ​​me angry (I almost throw the kindle), so it took me to read it roughly five days, but in the end I didn´t regret reading this book.
Posted by Adriana C at 1:30 PM