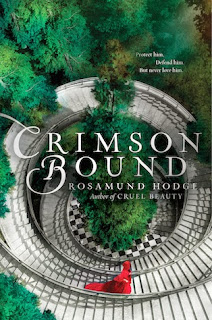 
When Rachelle was fifteen she was good—apprenticed to her aunt and in training to protect her village from dark magic. But she was also reckless— straying from the forest path in search of a way to free her world from the threat of eternal darkness. After an illicit meeting goes dreadfully wrong, Rachelle is forced to make a terrible choice that binds her to the very evil she had hoped to defeat.

Three years later, Rachelle has given her life to serving the realm, fighting deadly creatures in an effort to atone. When the king orders her to guard his son Armand—the man she hates most—Rachelle forces Armand to help her find the legendary sword that might save their world. As the two become unexpected allies, they uncover far-reaching conspiracies, hidden magic, and a love that may be their undoing. In a palace built on unbelievable wealth and dangerous secrets, can Rachelle discover the truth and stop the fall of endless night?

(This is a standalone novel, not part of the Cruel Beauty Universe.)


This is the second book I´ve read from this author and I really really enjoyed it, I love how Rachelle´s story is interwoven, Crimson Bound is inspired by the classic Red Riding Hood, but it also has elements of Hansel and Gretel and The Girl Without Hands.

Rachelle at the beginning of the story is 15 years old and she meets in the forest a forestborn, a woodland creature serving the Devourer and although she knows that she shouldn´t talk to him, she ignores the warnings of her aunt and ends up marked by him. And once marked she has only two options: to kill a human before three days have passed and become a creature of the forest or die.

Three years later Rachelle is the King´s bloodhound, fighting the forest creatures and intends to save as many humans as she can. She still feels guilty for not having died three years ago and tries to atone for her sins fighting forest creatures. And She hopes someday face the Devourer that threatens to bring darkness to the world.

The male characters are: Armand, the bastard son of the King, which has no hands because they were cut by a forestborn when he did not do what was asked of him, and now he´s considered a saint by the people of the Kingdom and Rachelle initially doesn´t like him, but as time passes she begins to tolerate him and ends up needing his help in the search for a mythical sword. Then is Erec, the captain of the King's guard and like Rachelle is a creature of the forest that protects humans and her sort of friend.

In this book the characters are not black and white, they´re not completely heroes nor villains (at least the main characters), which is something that I enjoyed a lot.

Crimson Bound is a dark and beautifully written story about a girl trying to redeem her sins and hoping to confront her archenemy, the plot has many twists and turns and is a unique fantasy book (despite being based on classic stories).
Posted by Adriana C at 9:00 AM