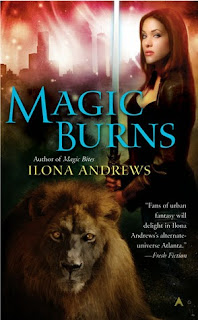 You can read my review of Magic Bites - here


Down in Atlanta, tempers – and temperatures – are about to flare…

As a mercenary who cleans up after magic gone wrong, Kate Daniels has seen her share of occupational hazards. Normally, waves of paranormal energy ebb and flow across Atlanta like a tide. But once every seven years, a flare comes, a time when magic runs rampant. Now Kate’s going to have to deal with problems on a much bigger scale: a divine one.

When Kate sets out to retrieve a set of stolen maps for the Pack, Atlanta’s paramilitary clan of shapeshifters, she quickly realizes much more at stake. During a flare, gods and goddesses can manifest – and battle for power. The stolen maps are only the opening gambit in an epic tug-of-war between two gods hoping for rebirth. And if Kate can’t stop the cataclysmic showdown, the city may not survive…


This is the second book in the Kate Daniels series, its an urban fantasy for adults, and in my opinion is better than Magic Bites, perhaps because the world where it develops has already been established and now it focuses more on the character development and relationships between them.

This series takes place in a world affected by magic, and while the magic "is working" all the technology goes down and vice versa. And from the recent changes in the magic fluctuation that have occurred recently it appears that a "flare" of energy or magic is going to hit the city which makes all kinds of technology stop working and makes everything magical or paranormal more powerful and / or unstable, so strange things start to happen.

Kate is a great heroine, strong, smart, independent, and is good kicking-butt to defend herself and with regard to Curran, the Beast Lord, she doesn´t know when to shut up, because she´s constantly irritating him and sort of bickering with him, even though she knows that he´s a powerful shape shifter and yet she can not resist antagonize him.

This time Kate is a representative of the Order of Merciful Aid - a group whose mission is to help others of any type of threat (within the law), for the right cost - so when the shifters request her help in recovering something that was stolen, she ends up involved in something bigger than she thought.

Magic Burns is an excellent urban fantasy book, it's funny, action-packed and a very fast read (I read it in approx. 1 day), and in this installment it was mixed with Celtic mythology.

I also read the short story of this book from Curran´s POV. You can find it here - Curran POV Collection.
Posted by Adriana C at 9:00 AM