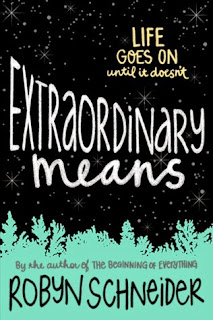 
Two teens with a deadly disease fall in love on the brink of a cure.

At seventeen, overachieving Lane finds himself at Latham House, a sanatorium for teens suffering from an incurable strain of tuberculosis. Part hospital and part boarding school, Latham is a place of endless rules and confusing rituals, where it's easier to fail breakfast than it is to flunk French.

There, Lane encounters a girl he knew years ago. Instead of the shy loner he remembers, Sadie has transformed. At Latham, she is sarcastic, fearless, and utterly compelling. Her friends, a group of eccentric troublemakers, fascinate Lane, who has never stepped out of bounds his whole life. And as he gradually becomes one of them, Sadie shows him their secrets: how to steal internet, how to sneak into town, and how to disable the med sensors they must wear at all times.

But there are consequences to having secrets, particularly at Latham House. And as Lane and Sadie begin to fall in love and their group begins to fall sicker, their insular world threatens to come crashing down. Told in alternating points of view, Extraordinary Means is a darkly funny story about doomed friendships, first love, and the rare miracle of second chances.

This is the second book I´ve read written by Robyn Schneider and I´ve have enjoyed both, something about her writing attracts me and that makes her stories leave a mark in me, especially The Beginning of Everything.

The story is told from alternating point of views of Lane and Sadie, both are sick of total-drug-resistant TB, which is a contagious and incurable disease because it does not respond favorably to any medicine, so that´s why the patients must be quarantined, and is fir this reason that Lane is sent to Latham House which is a mixture of hospital and boarding school, where teenagers with the disease are sent, there they´re monitored constantly medically through a bracelet that reports their vitals and they also have a half-day of classes and have relaxing physical activities, nothing strenuous and is expected that by balanced diet and relaxed activity, their illness symptoms improved and they can lead a more or less normal life, away from civilization.

Lane is a seventeen year old boy, in his senior year and whose goal is to enter Stanford University, so all his life so far - before his diagnosis - is school - he constantly studies - in addition to attending to clubs he belongs and model UN practice (as part of his curriculum) and volunteers at a health clinic, but all that changed when he was diagnosed with tuberculosis and sent to Latham House (since he cannot stay at home because he can infect his parents), once there he´s slow to adapt because he do not realize that he´s not the just for a few months and he´s working for when he returns to his normal life, but he´s really sick and can die at any time, but once he realizes his mortality, he begins to make changes in his habits and his way of seeing life, besides that Latham House he meets Sadie.

Sadie is a seventeen year old girl, who has spent a year and a half at Latham House, as herr disease does not improve, nor worse, so she´s "stable", but not cured. By the fact of having been living for so long in Latham, she isn´t very good at following the rules, she likes to challenge them and prefers to be different from the others patients, so she takes a more "free" life at Latham House than she had before she became sick, there with her group of friends she have fun and is happy with her life so far, until Sadie meets Lane and modify some of her rules.

This is a bittersweet and poignant story about how you start to live and appreciate every day of your life, when your future is uncertain. It's also about second chances, friendship and first love.