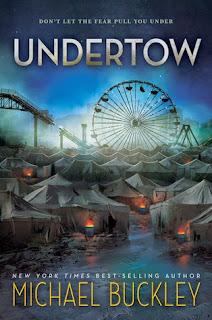 
Sixteen-year-old Lyric Walker’s life is forever changed when she witnesses the arrival of 30,000 Alpha, a five-nation race of ocean-dwelling warriors, on her beach in Coney Island. The world’s initial wonder and awe over the Alpha quickly turns ugly and paranoid and violent, and Lyric’s small town transforms into a military zone with humans on one side and Alpha on the other. When Lyric is recruited to help the crown prince, a boy named Fathom, assimilate, she begins to fall for him. But their love is a dangerous one, and there are forces on both sides working to keep them apart. Only, what if the Alpha are not actually the enemy? What if they are in fact humanity’s only hope of survival? Because the real enemy is coming. And it’s more terrifying than anything the world has ever seen.

Action, suspense, and romance whirlpool dangerously in this cinematic saga, a blend of District 9 and The Outsiders.

What draw me to read Undertow were the Alphas, I was intrigued by them, I wanted to know what they were actually, what were their intentions and why did they rise to the surface. And while the story is not original (sea creatures that rise to the surface), the plot kept my attention and I enjoyed reading it.

Undertow is told from the point of view of Lyric Walker a 17-year-old girl that lives in the "zone" at Coney Island with her father, a police officer and her mother, a housewife. The "zone", is militarized, surrounded by a fence of barbed wire and armed guards. And this is because three years before the Alphas came from the sea and the government decided to contain them within the area along with humans who for various reasons were trapped there. What has caused unrest among the humans that live in the area and several humans have died because they have been linked in some way (been friendly) with Alphas.

And now Lyric´high school will be part of a pilot program where teens Alphas will try to integrate in a  human school, which is not well accepted by humans and they don´t  accept peacefully this new infliction. So now high school will be even worse for Lyric.

Within this chaos Lyric is forced to start an acquaintance with Fathom, the Alpha Prince, which gradually turns into a romance (which in my opinion it lack more development or it would be good to leave it at just friendship).

Overall, I enjoyed reading Undertow, it´s an entertaining science fiction novel with action (toward the end) and is different from other books I've read about sea creatures. And I liked that is about the fear of the unknown, discrimination, family and friendship. I´m looking forward to read its sequel.