Review: Remember Me? by Sophie Kinsella 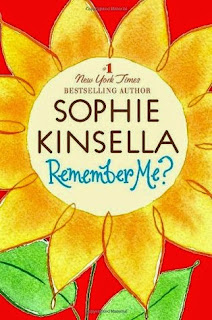 
Lexi wakes up in a hospital bed after a car accident, thinking it's 2004 and she's a twenty-five-year old with crooked teeth and a disastrous love life. But, to her disbelief, she learns it's actually 2007 - she's twenty-eight, her teeth are straight, she's the boss of her department - and she's married! To a good-looking millionaire! How on earth did she land the dream life??!

She can't believe her luck - especially when she sees her stunning new home. She's sure she'll have a fantastic marriage once she gets to know her husband again. He's drawn up a 'manual of our marriage,' which should help.

But as she learns more about her new self, chinks start to appear in the perfect life. All her old colleagues hate her. A rival is after her job. Then a dishevelled, sexy guy turns up...and lands a new bombshell. What happened to her? Will she ever remember? And what will happen if she does?

Remember Me? Is everything you can expect from a romantic comedy ..... it´s a very fun, light and fast read, with several cliches and with a unoriginal story, but this is not something bad for it in this occasion, because this is a book you can read just for fun.

The story begins with a 25 years-old Lexi, which is having a very bad day, everything went wrong, she didn´t received her bonus like her coworkers, her boyfriend did not arrive as promised and on top of everything the next day is the her father's funeral, so Lexi isn't with high spirits and is lamenting for her life, when she has an accident and the next she remembers is waking up in a hospital disoriented and where apparently three years have passed.

Lexi wakes up to a new life, apparently she had a car accident and lost her memory of the past three years and now Lexi is a married woman with a dream job, the dream home and with a new look; and now she must rediscover this new Lexi and live with a husband she doesn´t know and try to remember her lost memory.

Actually there are parts that where really funny that I laugh out loud and some parts that were quite absurd and there are parts where Lexi is doing silly things, but all is funny in the end, Eric, her new husband is also funny, in the things he does (though he´s a very serious person), but the marriage manual he makes to guide Lexi is something else.

Remember Me? is a hilarious romantic novel, light, without much drama, it´s a relaxing and entertaining read. I recommend it to those who like the chick-lit novels or romantic comedy.
Posted by Adriana C at 9:00 AM