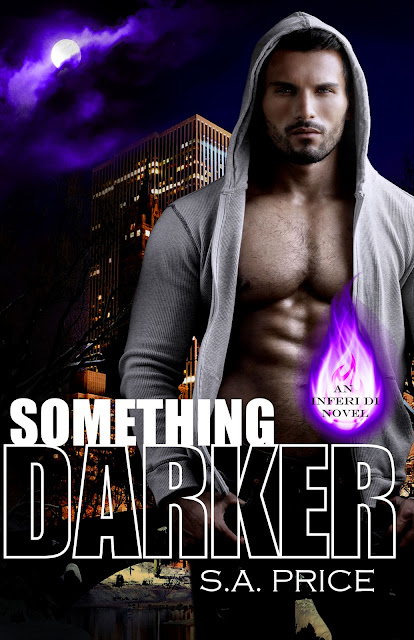 SOMETHING DARKER (book one of the Inferii Dii)

The one thing Syrus Alcot, the God of Death Osiris in the Egyptian Pantheon, wants in all the worlds is the woman he loved and lost returned to him. When he gave up his powers, and freedom for a life of service he was promised her return. That was over one thousand years ago. A member of a team of dark gods charged with keeping humanity safe, he leads a loveless existence in New York City, searching for the one thing that could bring his wife back to him, a lapis scarab that was lost to him ages before.

Gwen Stapleton, a mild mannered librarian, is unaware that she holds the key to not only Syrus’ happiness, but her own. Seemingly stuck in a hopeless relationship with a man she doesn’t love, she has no idea that a chance meeting in Alphabet City will start a landslide to her heart’s content. Because Gwen is the keeper of the scarab, and is everything Syrus has ever wanted… and hes not the only one.

An Ancient evil is waking, and its servants will stop at nothing to see it seize its rightful place as the new pantheon of earth. And in order for Syrus and his team to save the world, Gwen is going to have to accept him, and show that love does make all the difference.

To learn more about authors Stella and Audra Price, visit their Website:
www.stellaandaudra.com 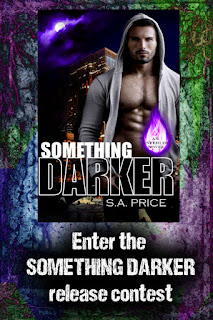 On December 18th, SOMETHING DARKER will be available for purchase and to celebrate the release authors S.A. Price are giving away some AMAZING, out of this world prizes! TRUST ME, you DO NOT want to miss out!

What are they giving away?

Are you ready for this?

A registration to Authors After Dark (2013 or 2014 if you are already registered for 2013), a VIP package including VIP early seating and entry badge, and welcome goodies from the hotel, a gift basket fulla goodies, backlist books, and Breakfast with Stella and Audra on Tuesday morning.  Awesome right? We thought so.

To learn more about Authors After Dark visit www.authorsafterdark.org

And wait, it gets better!!!

There will be a second and third place winner!

There's a little extra, too, but you will have to wait until December 18th to find out! :)