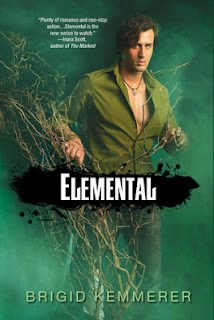 Earth, Fire, Air, Water – they are more than you dream.

As an air Elemental, 17-year-old Emily Morgan doesn’t have much power. That’s okay—she knows what happens to kids who do.

Like Michael Merrick. He’s an earth Elemental, one with enough power to level cities. Which makes him sexy. Dangerous. And completely off limits. At least according to Emily’s family.

But her summer job puts her in close contact with Michael, and neither of them can help the attraction they feel. When forces of nature like theirs collide, one misstep could get someone killed. Because Emily’s family doesn’t just want her to stay away from him.

They want him dead.

Elemental is a novella or short story (very short) of 50 pages that takes place six years before Storm, when Michael was 17 year-old and a summer coincides with Emily in a place where there are batting cages, where she is working for the summer. And we got to see a Michael who is always angry, wanting to escape his situation (his problems with the other elementals) and Emily's family is just one of the main elementals that would like too see him dead and end the truce between Merrick family and the rest of the elementals in the city.

Is not fully explain in this short story what are the elementals, just that they´re humans with affinity to an element: earth, water, air or fire and the stronger your power is, you are considered more dangerous, so because Michael is a pure elemental, the other elementals want him dead. We can also see a bit of Michael's relationship with his younger brothers and his parents.

I really enjoyed this novella, because I could see Michael before having the responsibility of raising his brothers and to some extent understand him. My only problem is that it is very short and ended in the most interesting part.