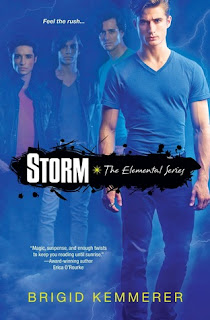 Earth, Fire, Air, Water – they have more power than you dream.

Ever since her ex-boyfriend spread those lies about her, Becca Chandler is suddenly getting all the guys—all the ones she doesn't want. Then she saves Chris Merrick from a beating in the school parking lot. Chris is different. Way different: he can control water—just like his brothers can control fire, wind, and earth. They’re powerful. Dangerous. Marked for death.

And now that she knows the truth, so is Becca.

Secrets are hard to keep when your life’s at stake. When Hunter, the mysterious new kid around school, turns up with a talent for being in the wrong place at the right time, Becca thinks she can trust him. But then Hunter goes head-to-head with Chris, and Becca wonders who’s hiding the most dangerous truth of all.


Storm is a book that I began to read to very high expectations, when it went it come out on April, I read several reviews of it, saying that this book was wonderful,  with hot guys and it was a must read .......Well let me tell you these reviews weren´t wrong, I love this new series (at least as far as I´ve read).

The story begins when Becca saves Chris Merrick when he´s getting a beating by two boys. And this is just the beginning and because without her knowing she got caught up in a dispute between elementals and now they think that she´s with Chris and she becomes a target of the elementals who wish you harm the Merricks.

The book is told from the point of view of Chris and Becca. Becca gets bullied at school, but despite this she is strong and has a strong sense of what is right. Chris is 16 year old, is the youngest of the Merricks, he is an elemental and his element is water. Another major character in the story is Hunter, which complements the love triangle and has a key role in this book.

Other characters that are introduced in this book are the rest of the Merrick brothers. The twins Gabriel and Nick Merrick of 17 year-old, which are very close. Nick is more focused, very smart and always tries to keep the peace between his brothers, his element is air and Gabriel is the most rebellious of the brothers, is the athlete, not very good at school, with explosive temper, his element is fire. There is also the older brother Michael Merrick,  he is 23 year-old, his element is earth, he is very responsible, he is raising her brothers and cares a lot about them, so much that he can be really rude but his only goal is to keep his brothers safe.

Storm further explains what are the elementals and also more about the guides that are like cops for the elementals which are called to eliminate the elementals that are causing problems or the pure elemental because their power is so strong and that can sometimes get out of control, so they are considered highly dangerous and should be eliminated. The Merrick's brothers are pure elementals but thanks to a deal that their parents did with the other elementary in the city, they have been allowed to live .... until now.

Storm is a novel with paranormal romance, with lots of action, is funny, has hot guys, with a very good plot that keeps you interested, and has an interesting twist and I feel that the ending was open to continue in the next book in the series - Spark. I loved this book, you must read it!