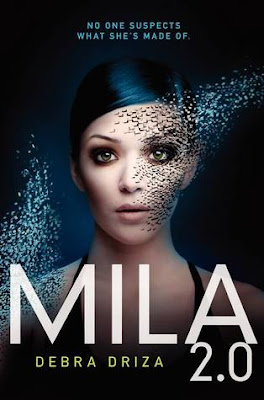 Mila was never meant to learn the truth about her identity. She was a girl living with her mother in a small Minnesota town. She was supposed to forget her past —that she was built in a secret computer science lab and programmed to do things real people would never do.

Now she has no choice but to run—from the dangerous operatives who want her terminated because she knows too much and from a mysterious group that wants to capture her alive and unlock her advanced technology. However, what Mila’s becoming is beyond anyone’s imagination, including her own, and it just might save her life.

Mila 2.0 is Debra Driza’s bold debut and the first book in a Bourne Identity–style trilogy that combines heart-pounding action with a riveting exploration of what it really means to be human. Fans of I Am Number Four will love Mila for who she is and what she longs to be—and a cliffhanger ending will leave them breathlessly awaiting the sequel.

Don´t forget to enter to my current giveaways here and here.
Posted by Adriana C at 1:58 PM