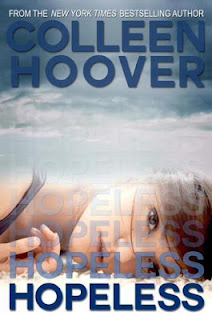 That’s what seventeen-year-old Sky realizes after she meets Dean Holder. A guy with a reputation that rivals her own and an uncanny ability to invoke feelings in her she’s never had before. He terrifies her and captivates her all in the span of just one encounter, and something about the way he makes her feel sparks buried memories from a past that she wishes could just stay buried.

Sky struggles to keep him at a distance knowing he’s nothing but trouble, but Holder insists on learning everything about her. After finally caving to his unwavering pursuit, Sky soon finds that Holder isn’t at all who he’s been claiming to be. When the secrets he’s been keeping are finally revealed, every single facet of Sky’s life will change forever.


After reading Slammed, Point of Retreat and now Hopeless, which are among my favorites NA novels. I've become a big fan of Colleen Hoover, she´s an excellent writer and I love her books. And the title of this book is perfect.

Hopeless is a wonderful, extraordinary, beautiful, sad, intense, it broke my heart more than once, it left me stunned at other times, this book is an emotional rollercoaster. After reading the synopsis you can have an idea about where the story goes and to some extent predict it, but I was completely wrong in several of my predictions and on more of one occasion I could not believe what I was reading and I was in shock. With this book I laugh, cry and it literally left me speechless.

This story is told entirely from the point of view of Sky, a girl who is about to turn 18 year-old and is for the first time attending public school because she used to be homeschooled. And she has never been attracted to guys or girls (the check both just in case), that is until she meets Holder, he makes her feel lust and desire for the first time, something she had never felt with any of the guys she has kissed (which have been many). But Holder not just make her feel desire he also make her feel afraid, so at the beginning she doesn´t know how to react to him, but Holder is a very persistent guy, so something do happen between them. Holder is weird  sometimes and sometimes he is just to lovable and occasionally he drifts off, this because he has a secret that affects them both.

Both as Sky and Holder are very lovable characters, I liked them very much, although there was a time I did not know what was happening in Holder´s mind, but after the big reveal, I LOVE him!

I highly recommend this book for adults, since some of the topics are unsuitable for younger readers. I'm dying to read Losing Hope, which will be told from the point of view of Holder.
Posted by Adriana C at 6:31 PM