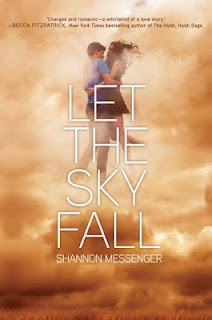 
Seventeen-year-old Vane Weston has no idea how he survived the category five tornado that killed his parents. And he has no idea if the beautiful, dark-haired girl who’s swept through his dreams every night since the storm is real. But he hopes she is.

Seventeen-year-old Audra is a sylph, an air elemental. She walks on the wind, can translate its alluring songs, and can even coax it into a weapon with a simple string of commands. She’s also a guardian—Vane’s guardian—and has sworn an oath to protect Vane at all costs. Even if it means sacrificing her own life.

When a hasty mistake reveals their location to the enemy who murdered both of their families, Audra’s forced to help Vane remember who he is. He has a power to claim—the secret language of the West Wind, which only he can understand. But unlocking his heritage will also unlock the memory Audra needs him to forget. And their greatest danger is not the warriors coming to destroy them—but the forbidden romance that’s grown between them.


I like variety in books, so when I realized that this book was about Sylphs a mythological creature that I did not know, I decided to take a chance on this story.

The story is told from the point of view of Vane and Audra, alternating between them. Vane is a seventeen year-old guy, he survived a tornado Category 5 when he was only 8 years old and was orphaned, and the worst part is that he has no memory of what happened before the tornado, he doesn´t remembers his parents, he only know what others have told him, all he can remember is a girl crying during the tornado, but then she disappears before his eyes and this girl has haunted him his entire life to the point that he dream her almost every day, but she is not frozen in time, she had been growing along with him ..... and she is literally the girl of his dreams and he is unable to care for another girl in the real world, in fact all his dates with other girls had been disastrous to the point that he thinks that he has some kind of curse, because he never gets a second date and not because he´s unattractive... he is a very attractive guy, but because in all his dates rare events always happen that ruin them. Vane is sarcastic, very sure of himself and something that struck me as odd is that sometimes he speaks of himself in third person.

On the other hand we have Audra, she is a sylph whose mission is to be the guardian of Vane and keep him safe, but he doesn´t have to  know about her existence because that could complicate things. She lives haunted by something that happened when she was little and feels that this mission can redeem her a bit and is willing to do anything to keep him safe.

I really liked Let the Sky Fall, even though I didn´t liked some things and I felt it a little slow, but overall I like  it, because is different, has good action scenes, has its funny moments, a forbidden romance and some interesting twists in the plot. I can not wait to read the next book and read more about the sylphs.