The Testing by Joelle Charbonneau 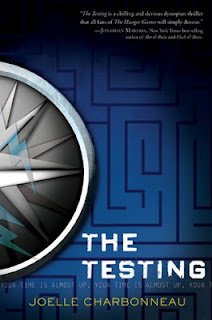 Reat the prequel The Testing Guide (The Testing 0.5) and the excerpt - here


Keep your friends close and your enemies closer. Isn’t that what they say? But how close is too close when they may be one in the same?

The Seven Stages War left much of the planet a charred wasteland. The future belongs to the next generation’s chosen few who must rebuild it. But to enter this elite group, candidates must first pass The Testing—their one chance at a college education and a rewarding career.

Cia Vale is honored to be chosen as a Testing candidate; eager to prove her worthiness as a University student and future leader of the United Commonwealth. But on the eve of her departure, her father’s advice hints at a darker side to her upcoming studies--trust no one.

But surely she can trust Tomas, her handsome childhood friend who offers an alliance? Tomas, who seems to care more about her with the passing of every grueling (and deadly) day of the Testing. To survive, Cia must choose: love without truth or life without trust.


Usually I do not like to compare one book to another and it bothers me when they put on the cover "if you like x book you can not miss this book", so I try to treat each book independently although sometimes in the dystopian genre many books are very similar. But with The Testing it is impossible not to compare it and find many similarities with The Hunger Games, especially the second part of book. But once I got past the similarities or deja vu, I coudn´t put it down, this book is actually very entertaining, it has a lot of action, suspense and got me hooked and wanting to know what was going to happen next.

The Testing tells the story of Cia a 16-year-old girl living in a post-apocalyptic / dystopian world, where the society is organized and what was once the United States is now United Commonwealth with Tosu City as its capital. And because the world is polluted and dying, the government needs that their future leaders and scientists are the best of the best, so candidates are selected each year from each community to take "The Testing" in order to continue their studies and attend the only university of the commonwealth, which is located in Tosu City. More than 100 candidates are presented for tests every year, but only 20 are accepted, after passing the various tests to which they are subjected. And once they have attended university, they´ll work for the government helping to revitalize the destruction caused by the wars.

"The Test" is divided into four parts: written, practical, group work and physical. And something that I really liked  about this book is that all candidates are very intelligent and are brilliant in a specific area, for example: Cia, is very good fixing things and working with electrical things.

The story is told from Cia´s POV, she lives in the Five Lakes community, one of the smaller communities and more distant from Tosu city. Cia's dream is to go to the university like her father did and despite having the hope of being selected, she isn´t very confident about been selected. So she´s kind of surprised when she´s selected as a candidate for "the testing" along with others classmates. Before leaving her father tells her to not trust anyone since there are candidates capable of anything just to eliminate the competition. Among his peers is Tomas, a guy who's very smart and they support each other for the duration of "the testing" and he´s the romantic interest of Cia

Overall, I really enjoy this book, it´s well structured, I liked the world-building, it´s very well explained the background of why there was an apocalypse and how the Commonwealth was formed, it has many action scenes (some are violent), it has suspense, it´s fast-paced, there aren´t dull moments. I recommended book for fans of dystopian novels.

I can not wait to read Independent Study and see what will happen with Cia and Tomas.


Thanks to Houghton Mifflin Books for Children for providing this ARC in exchange for an honest review.