The Reckoning by Kelley Armstrong 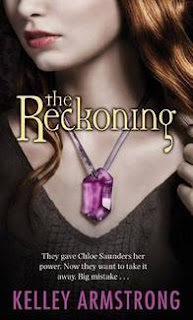 You can read my review of The Summoning - here and The Awakening - here.


My name is Chloe Saunders. I'm fifteen, and I would love to be normal.

But normal is one thing I'm not.

For one thing, I'm having these feelings for a certain antisocial werewolf and his sweet-tempered brother--who just happens to be a sorcerer--but, between you and me, I'm leaning toward the werewolf.

My friends and I are also on the run from an evil corporation that wants to get rid of us--permanently.
Definitely not normal.

And finally, I'm a genetically altered necromancer who can raise the dead, rotting corpses and all, without even trying.

As far away from normal as it gets.


This is the second time I read The Reckoning and it's my favorite book in the Darkest Powers trilogy, mainly because at last there is romance and there is a love triangle, which does not last long because Chloe realizes where her heart really is and although I would tell her go him!!! there he is!, but it takes her a while to recognize her feelings and decide between Derek and Simon.

I also liked to see how much they have change or grow, mainly because of the situation in which they find themselves, which is to run for their lives and in the process they try to find the Derek and Simon´s father,  also they´re trying to save Chloe´s aunt and Rae, which were left behind when they fled in the previous book ... so no pressure for them. But due to the change in their lives Chloe becomes more self-confident, Derek tries to be a little more tolerant and listen to others, Tori tries to be less hostile and the only one who is still as cheerful is Simon.

The end of the book was a little open and it left several things unresolved that when I first read the book, I had many questions, but some were answered later when I read the short stories that the author publish later - Darkest Powers Bonus Pack 2, but I still have several questions that I hope will be solved in the spin-off - Darkness Rising.