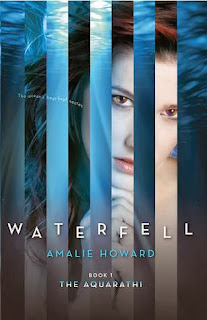 
THE GIRL WHO WOULD BE QUEEN

Nerissa Marin hides among teens in her human form, waiting for the day she can claim her birthright—the undersea kingdom stolen from her the day her father was murdered. Blending in is her best weapon—until her father's betrayer confronts Nerissa and challenges her to a battle to the death on Nerissa's upcoming birthday—the day she comes of age.

Amid danger and the heartbreak of her missing mother, falling for a human boy is the last thing Nerissa should do. But Lo Seavon breaches her defenses and somehow becomes the only person she can count on to help her desperate search for her mother, a prisoner of Nerissa's mortal enemy. Is Lo the linchpin that might win Nerissa back her crown? Or will this mortal boy become the weakness that destroys her?


What drawn to read this book was that I thought it was a book about mermaids, but in reality is more science fiction (at least the origin of the sea creatures) that mythological creatures. The Aquarathi are sea creatures, but there aren´t sirens/mermaids.

The book is predictable and a bit slow for my taste and the main characters are Nerissa and Lo are not the best characters in the world. Nerissa is a princess who has always done and said what she wants, she´s willful, selfish and arrogant, she´s living with her guardians in the human world and they always refer to her as "My Lady", always bowing to her and doing what she wants and when her father is killed she became the next queen, but can not take possession until her seventeen birthday. And meanwhile Lotharius or Lo, is the new kid at school, he´s arrogant, sure of himself and apparently his only interest is surfing, and I never felt a real interest in Nerissa from his part. And the truth never saw a real romance, they are always fighting, bantering and Nerissa at least most of the book is trying to convince everyone that she isn´t interested in Lo.

The secondary characters were the ones that I liked the most, especially Jenna, she´s Nerissa´s human best friend, she's great and I love that she unconditionally supports Nerissa in everything.

Overall, this is an entertaining book, but the bad (at least for me) is that most of the story takes place on land and I got to see very little of Waterfell , the underwater world. Something I liked and I thought it was original it was the origin of the Aquaranthi race, this is the sci-fi part of the plot and I also like the Aquaranthi´s special powers. There are some surprises at the end of the story that I did not expect, and I feel that the book was focused more on the romance between Nerissa and Lo, which is insta-love that what was happening in the underwater realm. But despite all this details, I hope to read the next book because it seems that it will take place on the underwater kingdom. This series has so much potential, so I hope that it improve in the next book. And I repeat, this book is NOT a book about mermaids.


I received an eARC of this book from the publisher via Netgalley in exchange of an honest review.
Posted by Adriana C at 3:30 PM